When I was at Billie Creek Village we had a pair of females donkeys. Their names were Jenny and Jenny. Hey, don't look at me, I don't know who named them. They were "rescued" by the village owner from a farm where they were not being well cared for. It took awhile, but after some love and attention their coats and hooves eventually healed and they became lovely jennets again. Having been two of only a handful of remaining livestock on the property, they were pretty popular amongst the guests. The donkeys thrived on the attention. When a small child would approach the fence I would often see one bend its head down so the child could scratch behind its ears. They knew why they were there. It was as if they appreciated the care they were getting so they tried their best to entertain the guests. Each morning during chores, Jenny or Jenny, would give me a hug. Just a gentle head on my shoulder. Their way of saying thank you for feeding them. Needless to say I was smitten. Then the village closed. I never found out what happened to them.

So when Donkey-Otie arrived at Conner Prairie I decided I didn't want anything to do with him. Nope. Don't need no stinkin' donkey in my life. 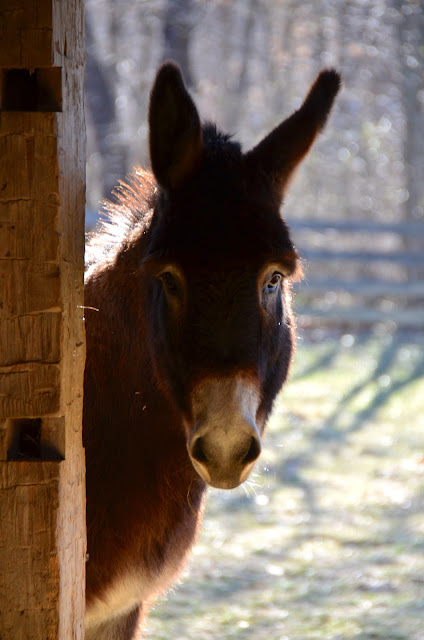 Then I started working in ag full-time. Then I had to see him regularly to feed him. He chewed on my scarf a little that first day, I didn't care much for that. I kept my distance at first. I avoided eye contact. Then one morning, he hugged me, and I fell. I fell hard. He totally played me. 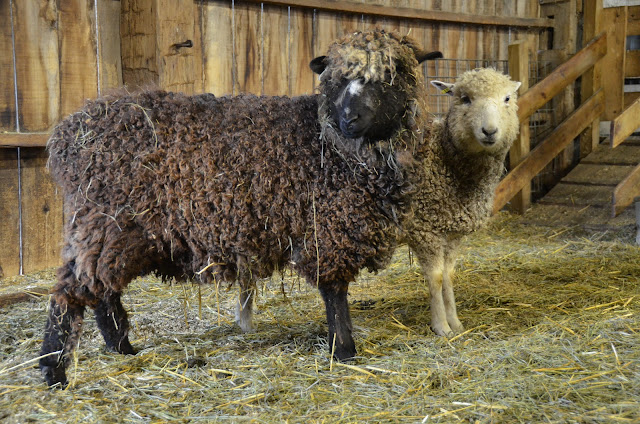 We are incredibly excited to add these girls to the team. Not only are they beautiful, but they allow us the opportunity to introduce our guests to the story of Robert Bakewell, who revolutionized agriculture by being the first to use modern line-breeding techniques with his flock in the 1700s. Another famous farmer connected to the breed was George Washington.

Despite their presidential connection, the Leicester Longwool fell out of favor and had all but become extinct in the United States, until the 1980s when Colonial Williamsburg stepped in to reestablish the breed. Today, the Leicester Longwool is one of the sheep breeds listed by the American Livestock Breeds Conservancy as critically endangered. Breeds considered critical have fewer than 200 North American annual registrations and an estimated global population of less than 2,000.

We are humbled to have the opportunity to play a role in conserving this grand old breed. Both ewes have been exposed to a ram so we are looking forward to spring lambs right about the time the grounds open again.

Elmo is not happy with me. You see I posted the unflattering shot of him the other day and now everyone thinks he's fat. He is an outdoor long-haired cat so he has a really thick winter coat.

"You're not exactly looking slim and trim in your long underwear and Carhart's there missy," he said. 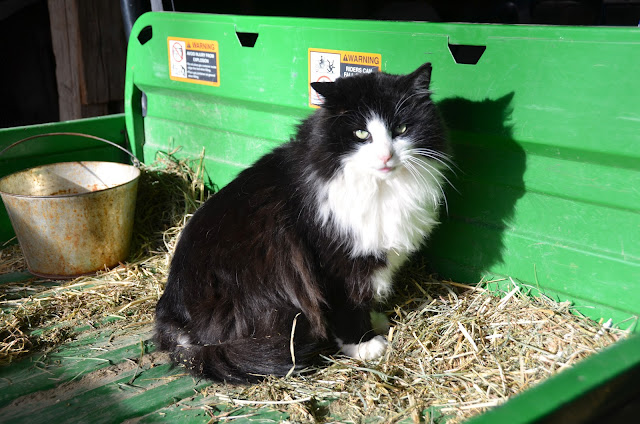 I can attest, in his case, he really isn't fat he's just fluffy. Sorry, Elmo.
Posted by Christine at 8:04 PM 9 comments:

Why I Don't Have Time to Blog

I suspect that if I just told you I've been too busy to write you would think, "Yeah, yeah, we're all busy. Whatever." So I figure I better show you what I've been doing with all my time lately.

This is Elmo, the friendliest of the four cats at work. The first priority of every work day is to feed and rub Elmo. 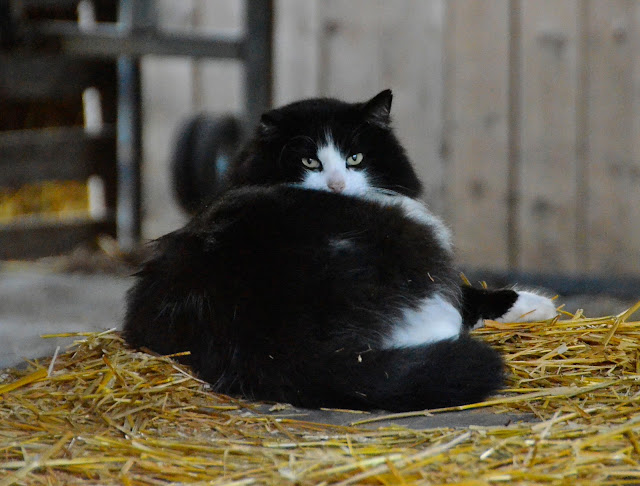 Elmo is the same color as Blue, but they're not related. It is taking me a while to learn the pedigrees of all the stock, but I think I've at least got this one straight in my mind. Blue is a Randall Lineback. He prefers to be next in line for feeding and rubbing. 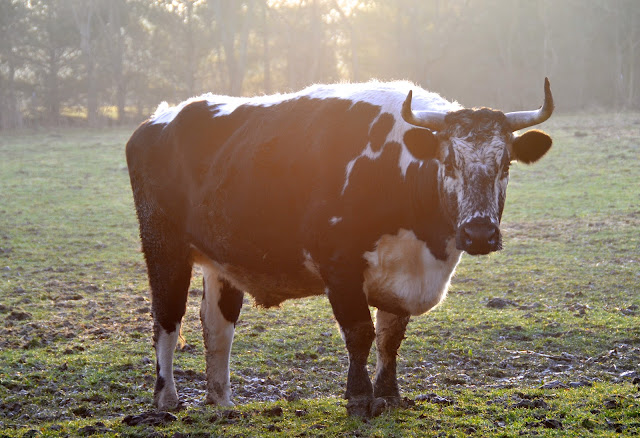 Feeding the big stock is always an adventure. Remember the scene from Jurassic Park when the people were being chased by the dinosaurs? Yeah. It totally felt like that the first few times I did it, but I'm better now.  Kittens are more ferocious than these cattle. 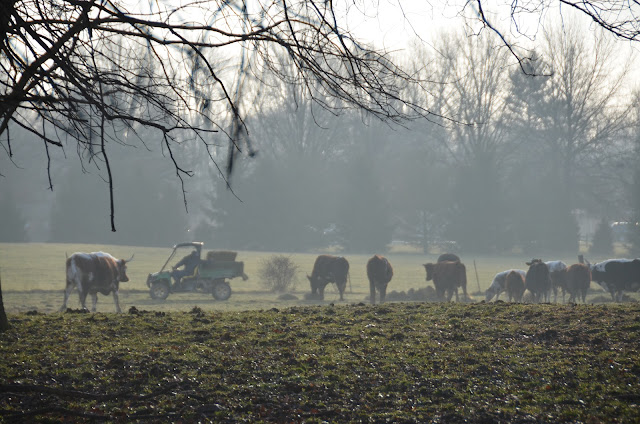 The flock of Tunis sheep get their provisions next. 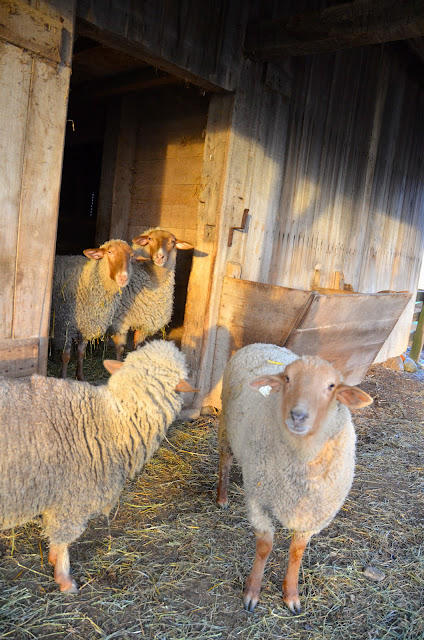 Along with a healthy dose of rubbing for the beggars. 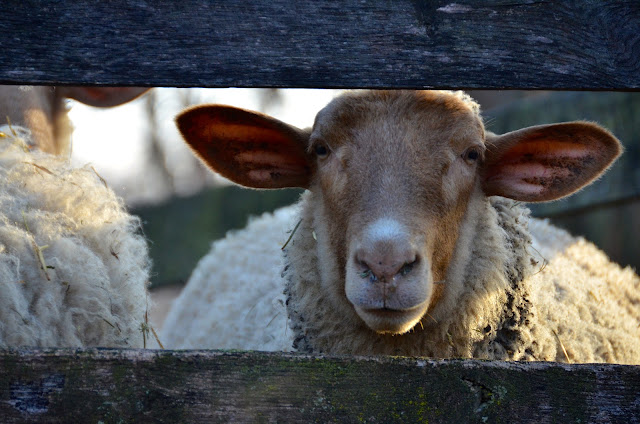 Inside the Animal Encounters barn are the Horned Dorset ewe lambs who are temporarily sharing their space with a few Nubian goats. I often have to stop here for a minute or two to clean Mine off. She tends to wear her breakfast. 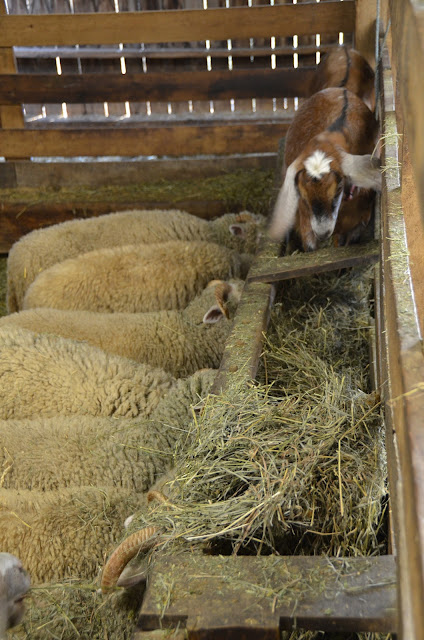 For the moment, two calves are still in another pen inside the barn. They will be moving out very soon. Dena is a dual-purpose Shorthorn. A breed who's dual-purpose genetics fell out of favor. Her father has been dead for 40 years but thanks to modern technology we are bringing those genes back. 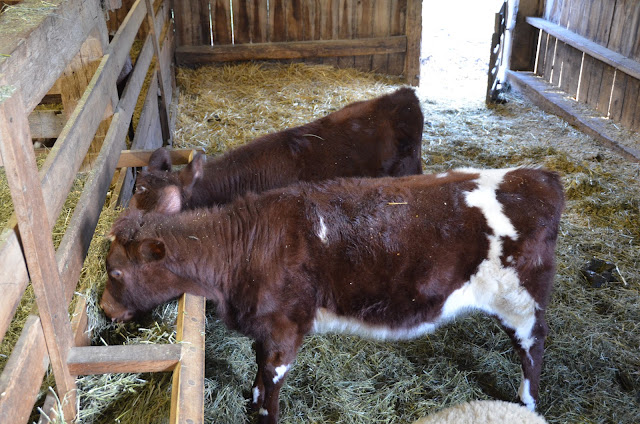 New inside the barn this week is Houdini, an Ossabaw Island Hog and his lady friends. They have taken over the goat pen as their love nest and will help loosen up the layers of straw and wood shavings to make the pen easier to clean out. Well, in theory. None of the pens are particularly easy to clean out, but that's a whole 'nother blog post. 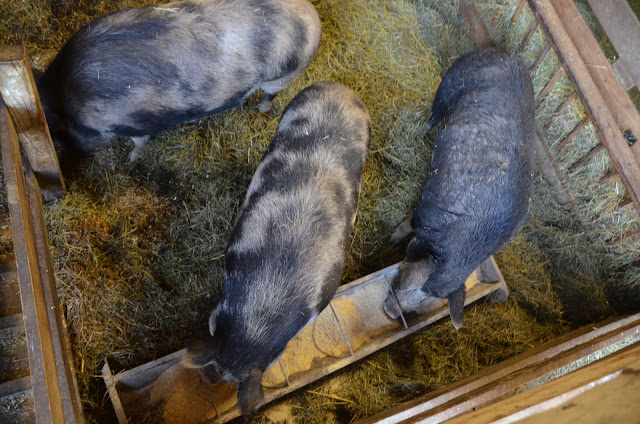 The rest of the 40 or so pigs are getting fat in two other pens on the property until it is their turn to go to market. We are all pretty much ready to see them off, the 50 pound bags of feed are heavy, not to mention expensive. 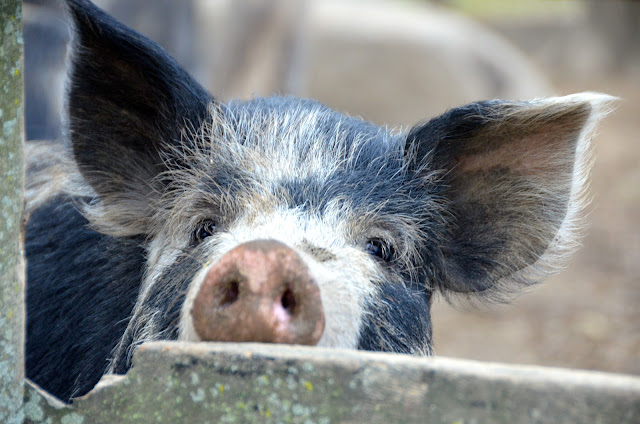 Then there is this guy. I tried to completely ignore him for months. Then it happened one day; I looked him in the eye. He's had me wrapped around his hoof ever since. Donkey-Otie is the guardian over the Horned Dorset breeding flock. 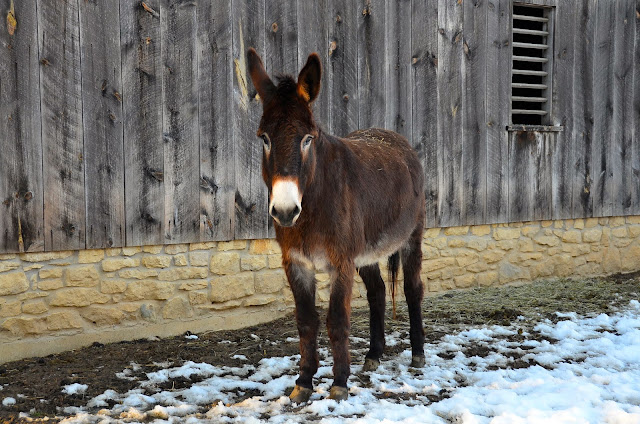 Who pretty much have me at their beck and call as well. I mean look at that face. This is the worlds sweetest little ram. 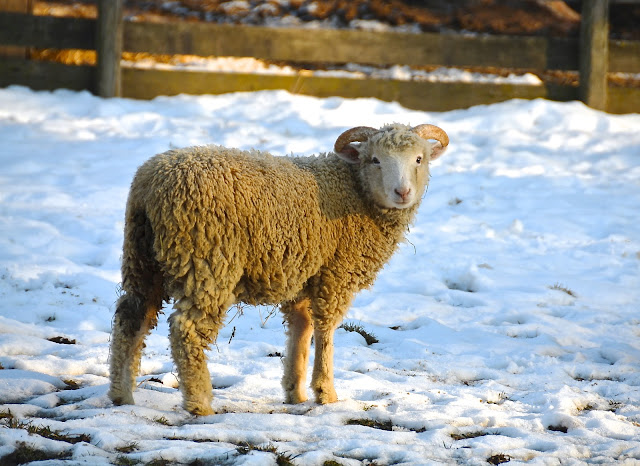 Last, but certainly not least are the chickens. There are two roosters. They don't care for living together. One has taken up residence elsewhere. Sound familiar to anyone? Only here he isn't getting a private suite, instead he's taken up living with the pigs. How he has convinced them not to eat him I'll never understand. 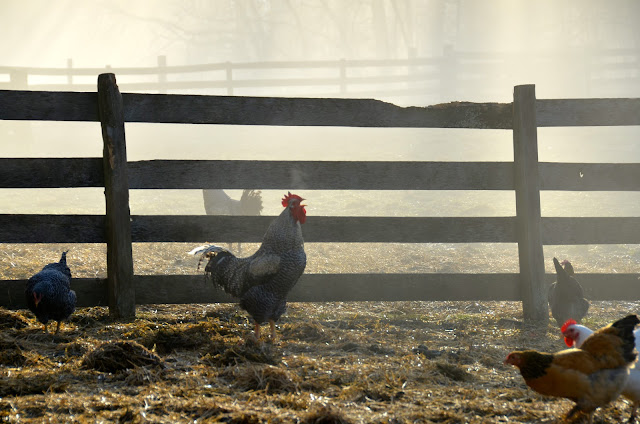 So you can see why I've been busy, that's just the morning chores!