Well, I had my own blog post rolling around in my brain I just needed to get it written down. Then Jen shared a link to another blog with me on facebook and I nearly hurt myself laughing. I do believe these girls are my soul sisters. You really MUST read this. Funny, FUNNY stuff.

I had to then explain to Jen she had no idea how appropriate this post was. I’ve crossed paths with both a giant ape and a giant flamingo in my past much to the Engineer’s dismay and I actually have that EXACT SAME chicken only in a much smaller version which he HATES.

Updated to add:  seems that post has gone viral. If you can’t get to it now try again later, it’s worth it.

It’s Good to be Jack

There has been a major reduction in the amount of testosterone flowing around the farm in recent days. I have a strict No Testes Allowed policy. Dino had his little “procedure” yesterday. The entire concept of my policy always makes my son a little nervous. Understandably so. But as he was helping the vet prepare Dino yesterday by holding up his tail I think it finally sunk in. He exclaimed, “You mean you’re going to cut them OFF?”

My son grew pale and said, “Oh no, I can’t stay here and watch this.”

I traded places with him after I finally stopped laughing. 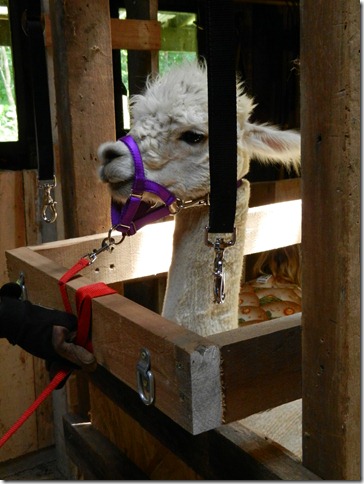 Then there was also a tragic accident on the farm over the weekend. Blackbeard disappeared without a trace. I looked high and low for him but he never turned up.  Then later when I was discussing the situation with someone my son mentioned he saw part of him in the East pasture on Friday. It appears Blackbeard must have committed suicide by jumping into the pasture with the Willabeast. 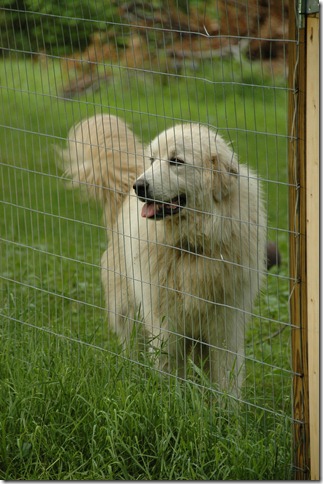 He lived a long and luxurious life. I have no idea how old of a rooster he was but based on the size of his spurs he’d been around for a very long time. While it is certainly tragic, he really was a good old bird, in the grand scheme of daily life here on the farm it doesn’t constitute a crisis. You see, Old One-Eyed Calico Jack has been waiting for this day to come. The day he can finally be the Top Dog er Rooster. Now he has his pick of the ladies with no worries of anyone beating him up. Well, other than the ladies themselves. They aren’t exactly welcoming his advances with open arms. 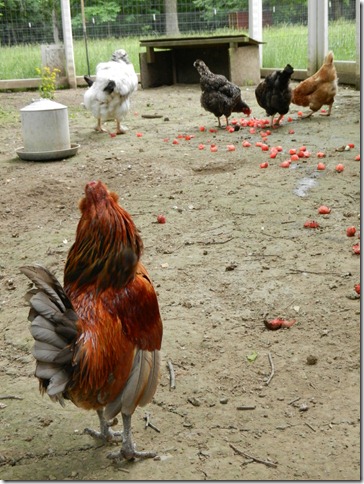 I’ll miss old Blackbeard, but it is not all bad. I finally get to move Jack and his girls out of his assisted living facility and get my garden shed back. And Jack gets to be the Big Man on the Farm at least for now until someone else grows a pair. 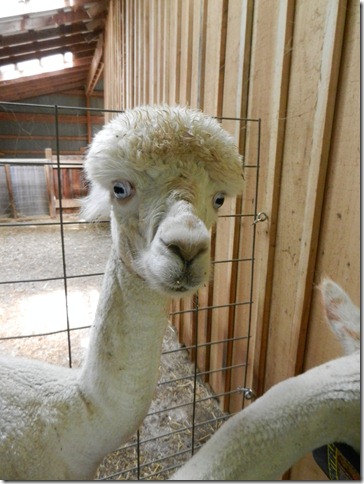 I have a feeling it will be awhile before ALL the boys stop acting a little nervous around here.

I found a picture of my great, great grandmother. She even looks like me. 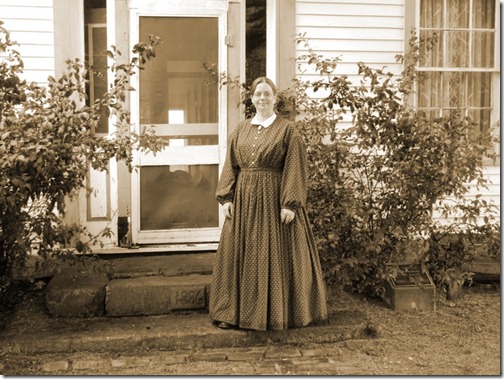 Okay, not really. That IS me. Billie Creek Village wrapped up another annual Civil War Days event over the weekend. The old farmhouse was invaded by Confederate soldiers. I didn’t have a shotgun handy so I defended myself with a knitting needle. It seems they only wanted shelter from the rain though so I didn’t need to use it.

At one point I had to flee to the village to try to find a Union soldier to help save my son from being recruited by rebel soldiers. Unfortunately they were all off preparing for battle and were unable to help me. 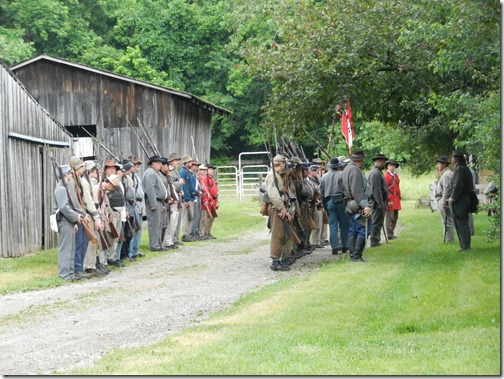 It wasn’t until later when the Sgt Major’s wife informed me that most of the reenactors have two sets of uniforms and fight on whichever side needs warm bodies that I let my guard down. He didn’t officially sign up, but he’s already making hard tack and beef jerky. Something tells me this won’t be the last time I talk about reenacting.

My boy is heading off to war. *sniff*  Thank goodness they aren’t real musket balls.

How to Make a Llama Smile

It appears all it takes to make a llama really, really happy is to give them a big barn with a dirt floor. Thelma and Louise moved into their permanent home today. I wish I would have had my video camera handy. They took one step in, looked around, then flung themselves to the floor and started dust bathing. 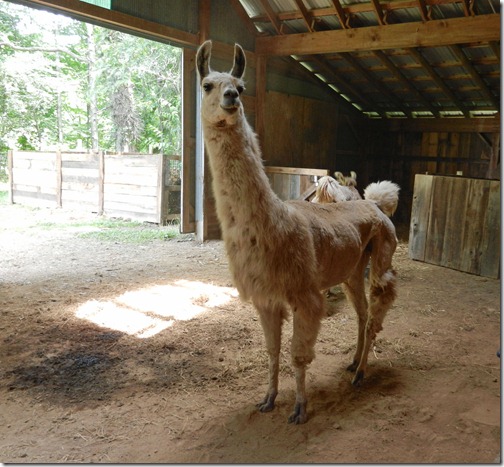 They were absolutely gleeful. 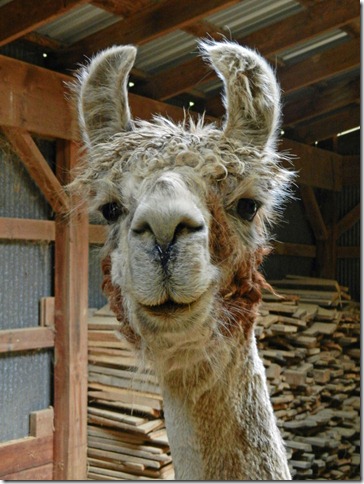 Hard to believe this early in the year it is already 95 degrees in the shade.  When it gets this hot is is a good idea to break out the sprinklers for the kids. They love it. 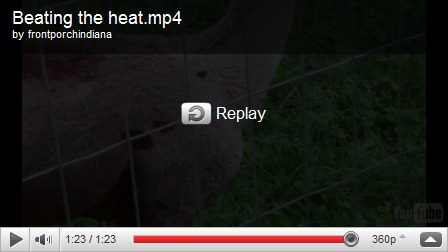 Sammy and Dino playing in the sprinkler.

Alpacas and Llamas are particularly susceptible to the heat so we are doing everything we can to make them comfortable. Spraying their legs and bellies helps them cool down. Kind of like taking off your shoes and dipping your feet in the creek I suppose.

They Won’t Get Spoiled Here 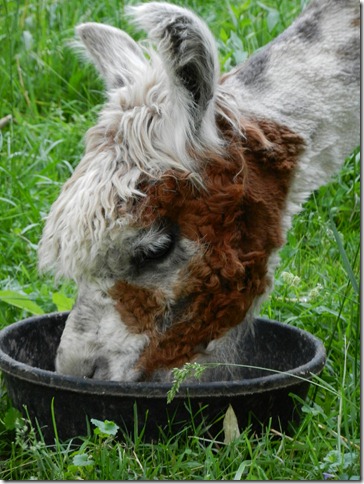 Fresh bedding and a cool fan to keep the bugs off. 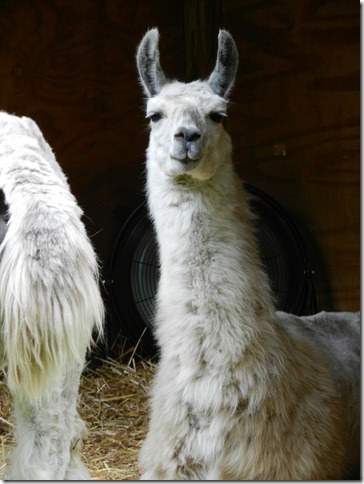 “Anything else I can get for you ladies tonight?”, I asked.

How could two llamas just disappear? I mean, they’re kind of big.

They were just there earlier, greeting me with that “whadjabringme” look when they noticed the feed scoop. Didn’t take them long to figure out that I am the bringer of noms.

Yet after I cleaned the center section of the barn this morning they were missing. Two big llamas nowhere to be seen.

I scratched my head and thought, “What the heck?”

I walked to their pasture to search the innermost corners of their shed. No llamas. Then, as I started scanning the pasture back and forth, contemplating a possible alien abduction, I swear I heard giggling.

“Peek-A-Boo”, said Thelma sticking her head out from behind the hay barn. 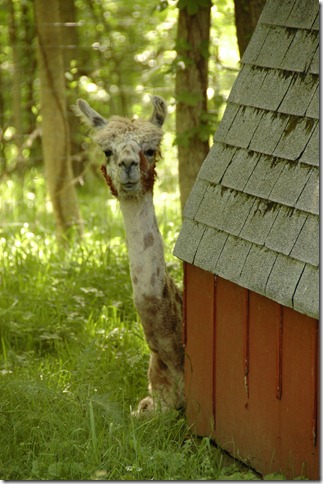 “Hee, hee, that was so funny”, said Louise 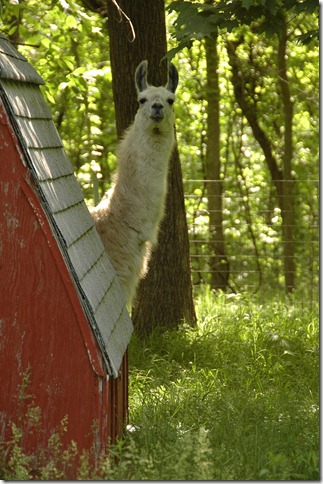 “Now why would you girls do that to me?”, I scolded. 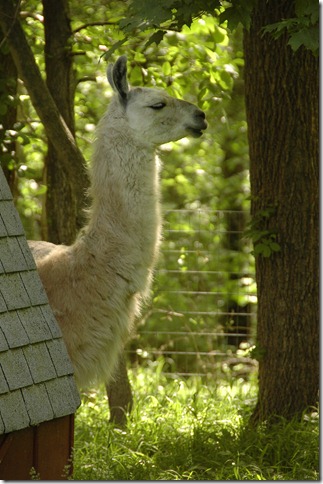 “Well, we drew the short straw during the nightly drive-the-human-crazy meeting”, replied Louise.  “It was our turn.” 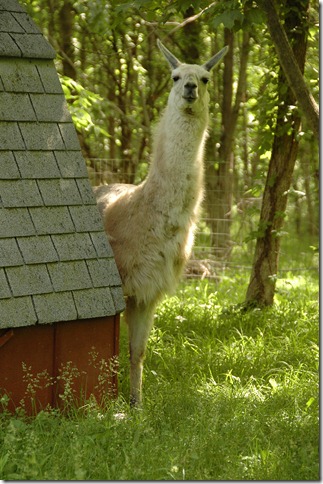