I kinda have a thing about sewing boxes. I've always liked sewing boxes. I remember I had a pink wooden one when I was a little girl that my grandmother had painted with little white flowers. I loved that I had my very own tomato pincushion, measuring tape and other sewing notions. I later graduated to a plastic handled case that held not only those things, but my embroidery floss and hoops. I had that case for well over 25 years. Since then my stash of sewing items has grown from fitting in that small case to filling an entire room. I know I can't fit all my notions into a small box anymore, but I still can't resist a nice sewing box when I see one.

There is something about a person's sewing box that speaks volumes about their personality. I have a particular passion for the pincushion/thread keep/box combination type. My mother gifted me with this little gem several years ago. I love it for its plain and simple lines—it says, "I am humble and down-to-earth." 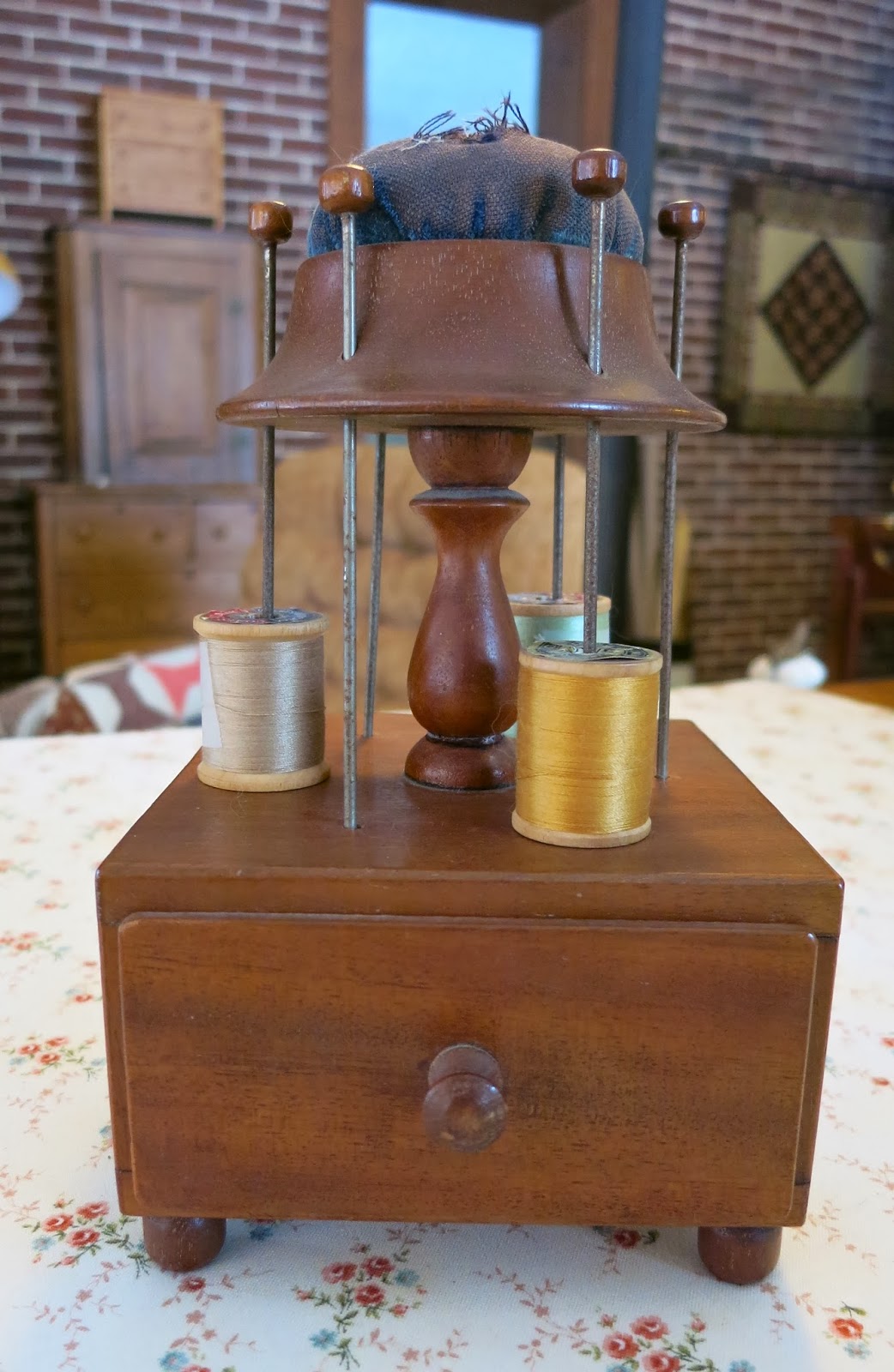 Although the same size and function, this next one leans a bit more to the artsy, free-spirit side. 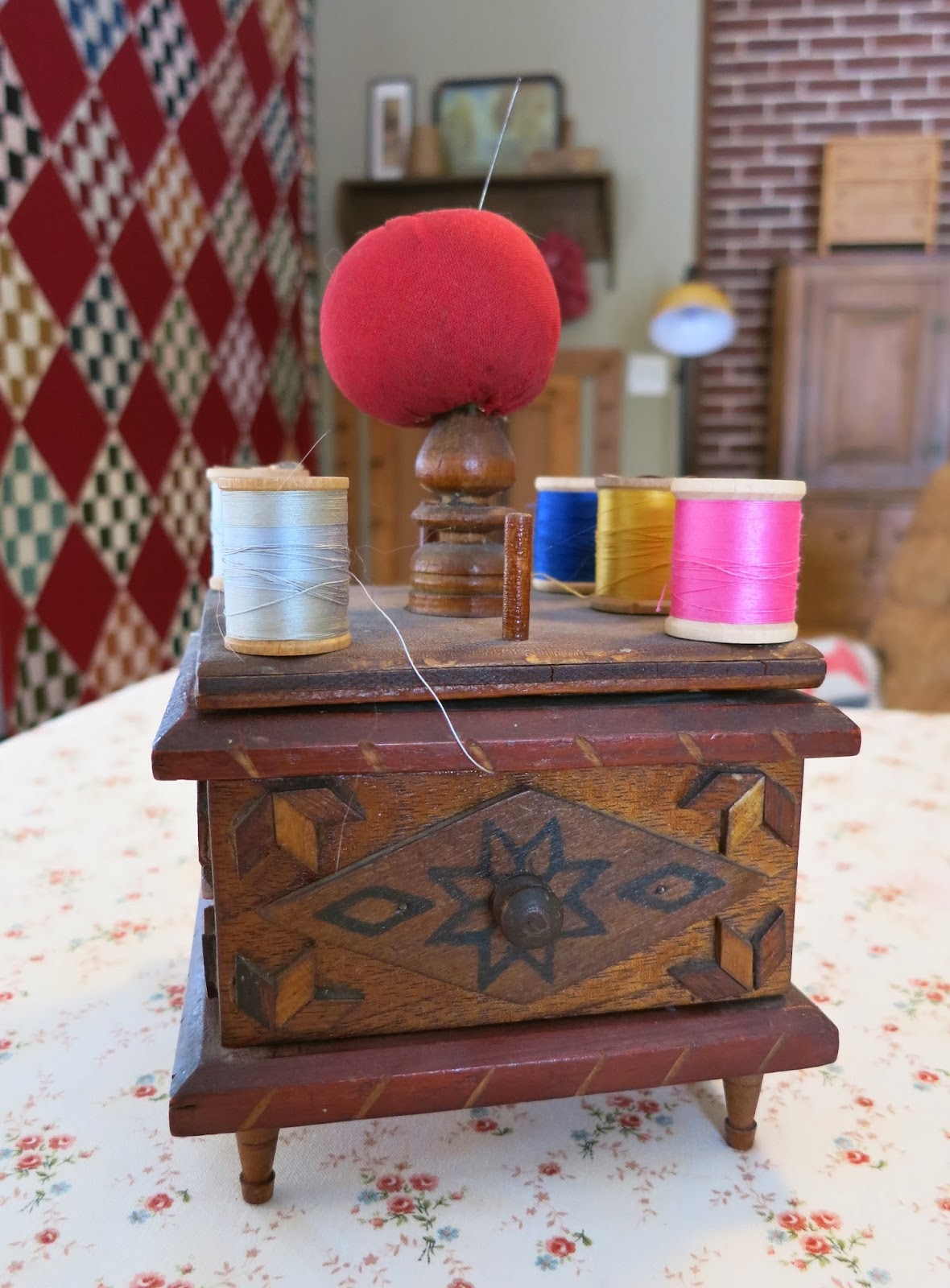 It has a lazy susan top and tramp-art-style decoration that says, "I like a bit of drama." 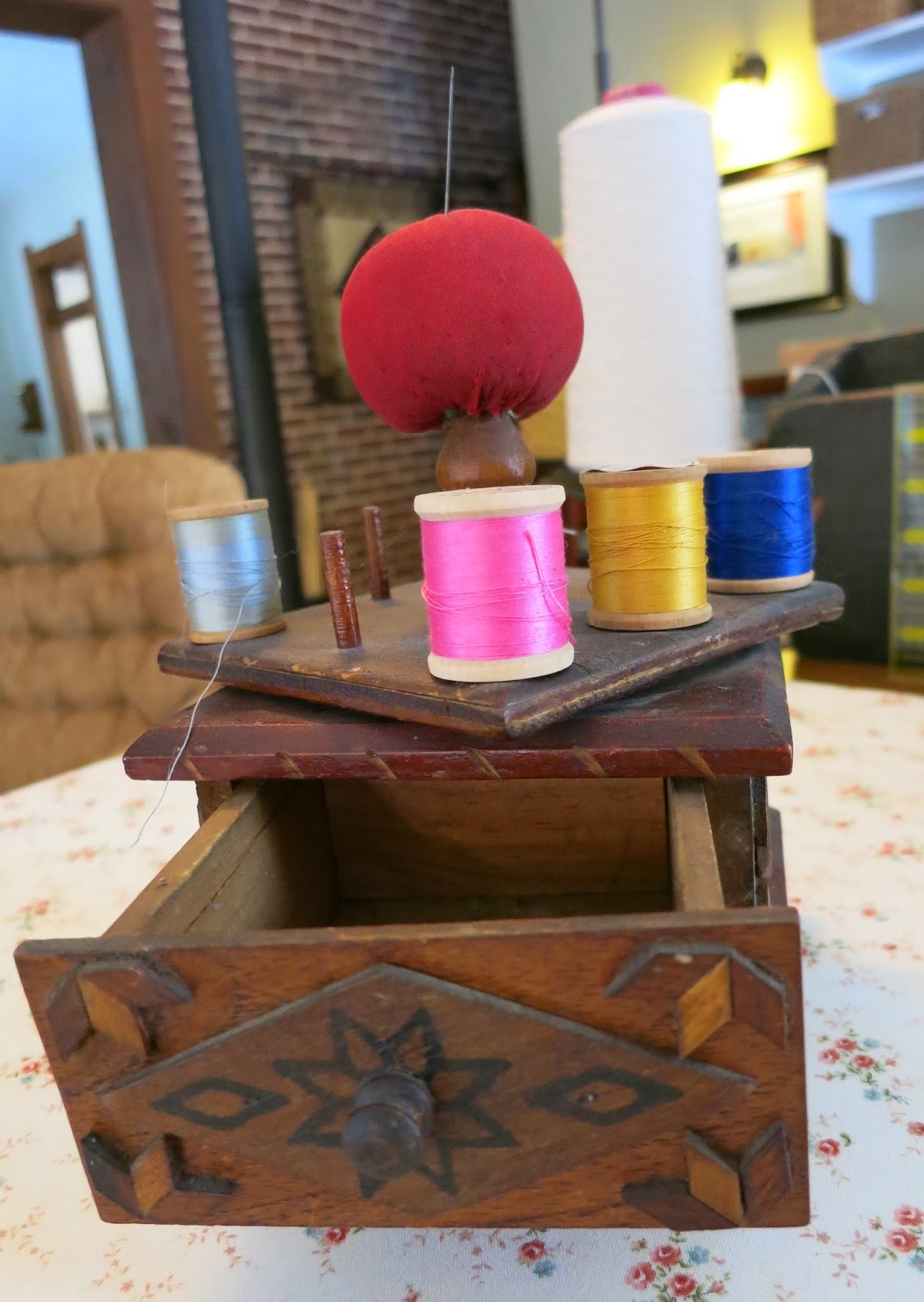 My latest acquisition I find even more interesting. It has a lazy susan, and while it is difficult to tell in the photo, it is decorated with a gold leaf fleur de lis between each spool and on the lid. Very high-end and classy in its day, I'm sure. 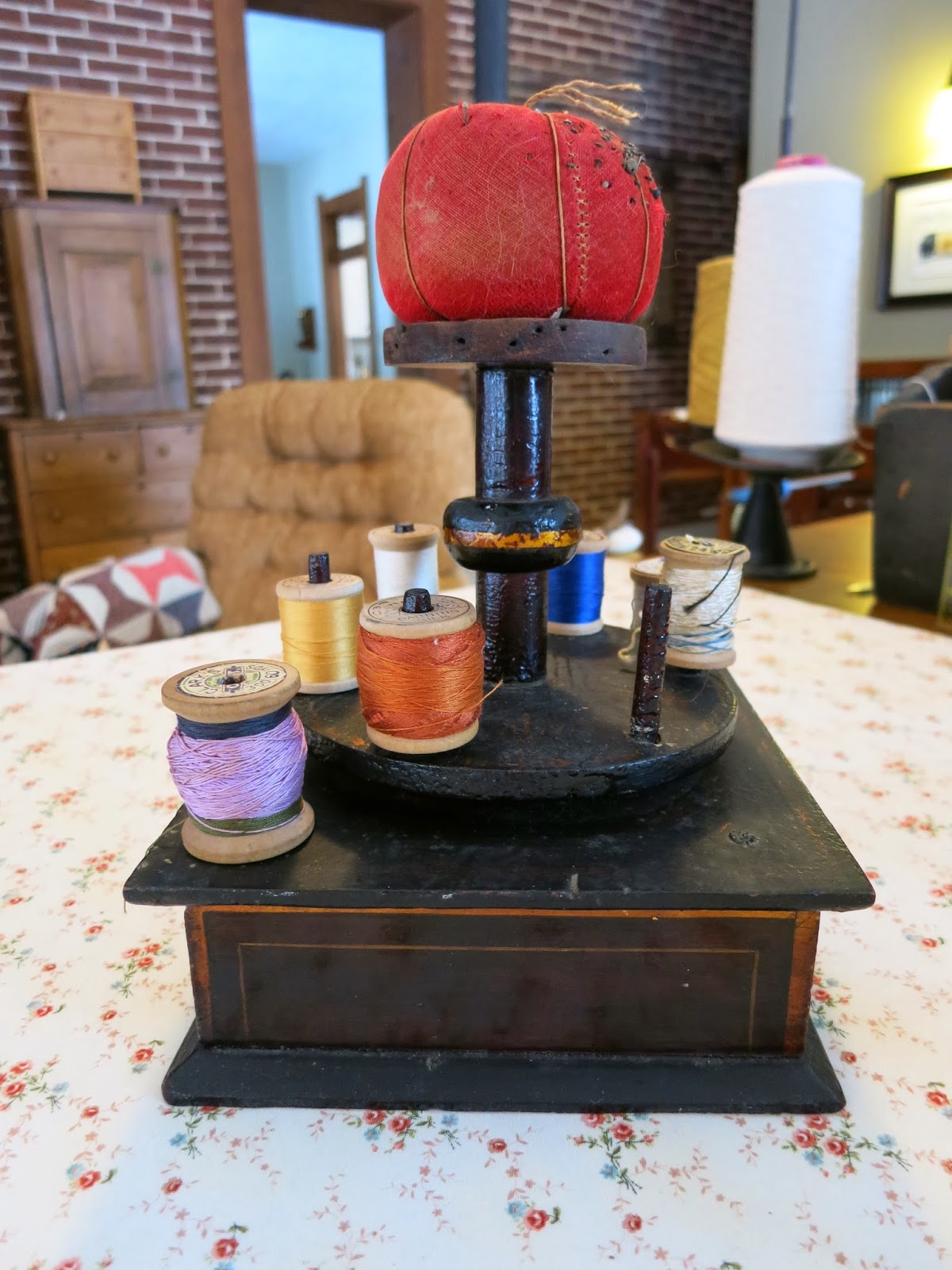 The box lid even swivels dramatically to reveal a place for notions. Over all it is a lovely piece that says, "Look at me." 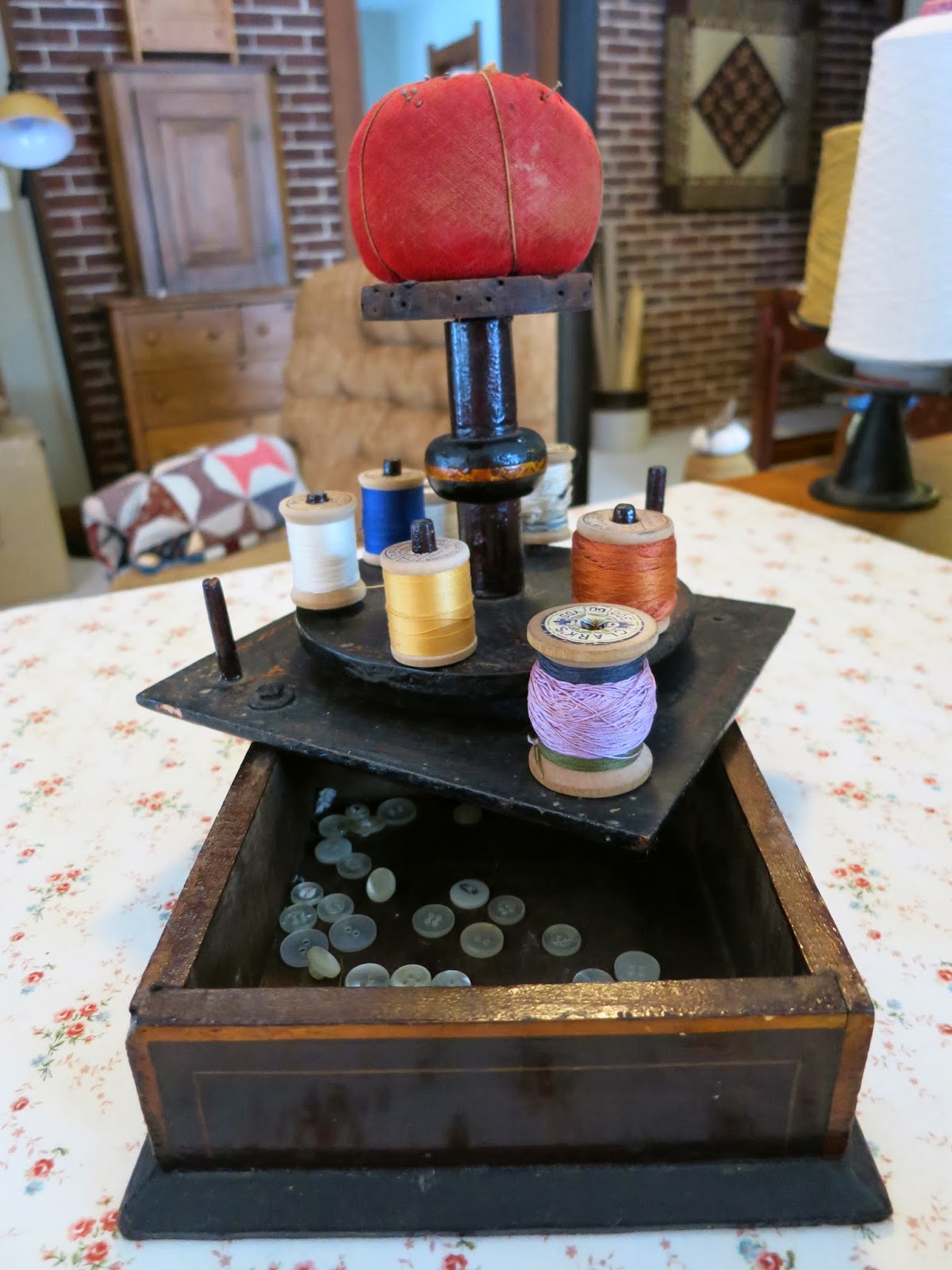 I have to admit I've had this for a month now, but I just noticed its dirty little secret. The top of this high-end classy piece was actually just recycled from a spoon-carved panel of some sort. 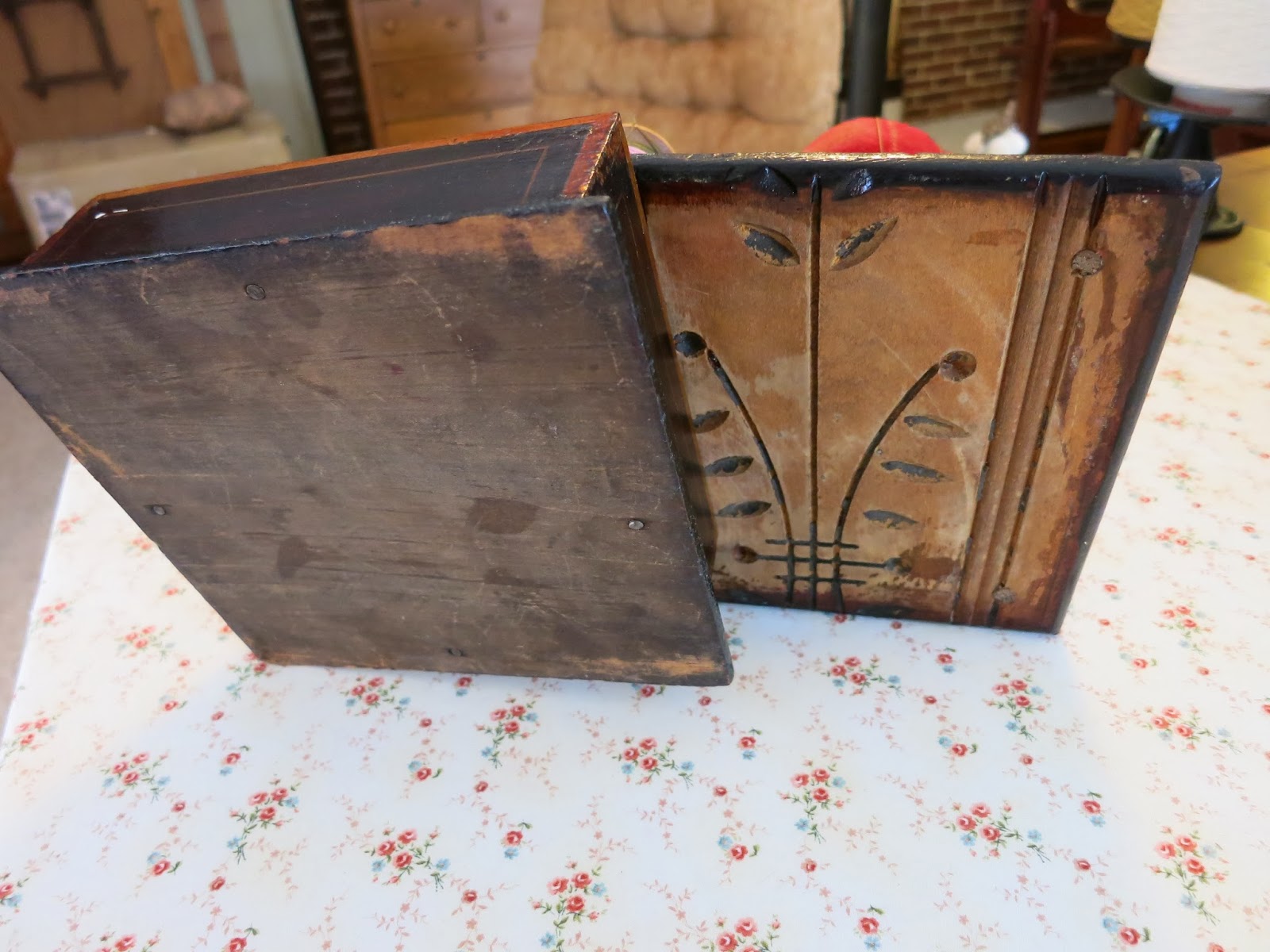 Proof you shouldn't judge a box by its cover. How often do we make these same assumptions about each other?

On the Design Wall

I am plugging away at a quilt I started at retreat back in May. I am bound and determined to get the top finished by the end of the month. I think I'll make it as everything is cut and pieced, I just need to assemble. I am pleased that almost the entire queen-size quilt fits on the new design wall. There will be two borders - one pieced, which you can see a small section of on the right, and then another plain red border. 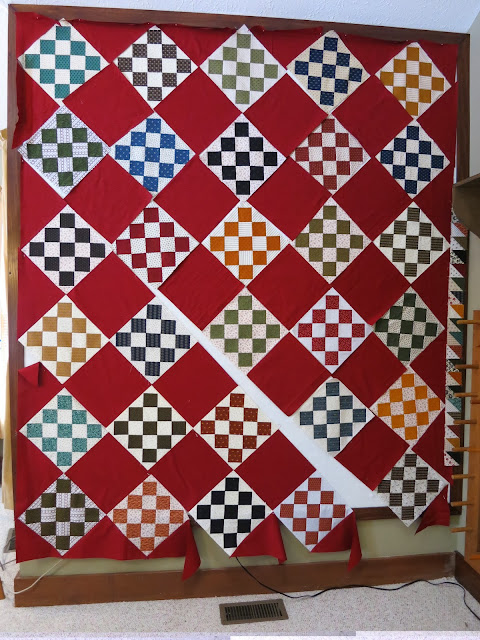 In the mean time my wool has arrived home from the mill--two giant boxes of it. Of course, I have no place left to put it in the studio so you know what that means… 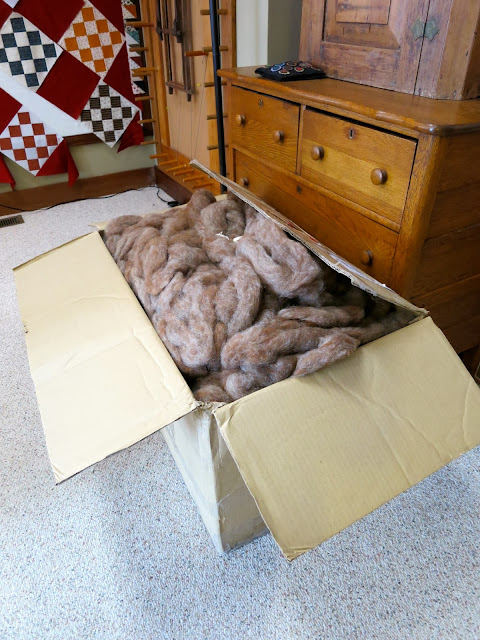 back in the shower it goes! Perhaps this time if I leave it in the boxes I can avoid an avalanche? 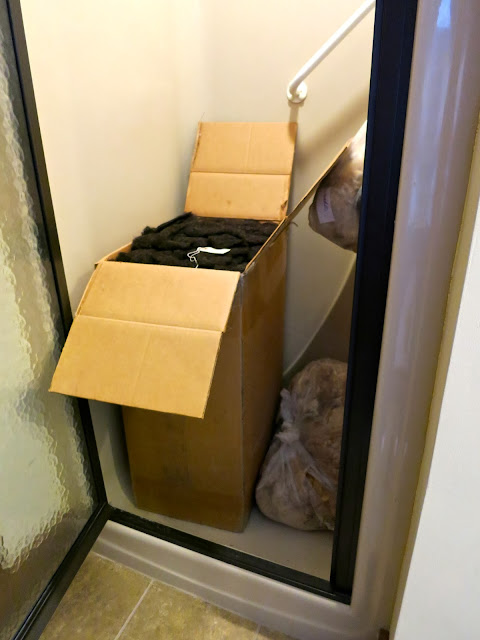 There are some bloggers out there that do a wonderful job of sharing what is going on in their lives. They share the good, the bad, and the ugly in such a way that it is not only interesting, but often inspirational. Hilary, of Crazy as a Loom comes to mind. She's struggled with some serious health issues, multiple surgeries, the loss of a parent, etc., and not once have I ever felt she sounded as if she were complaining. In fact, she inspires me. Yet, when I sit down to do a post about what is happening in my own life, I think I sound like a whiney little three-year-old. So instead, I take Mom's advice -- if I don't have anything good to say I shouldn't say anything at all. That's how my blog goes dark for a month. There are enough depressing things going on out there in cyberspace I figure I don't need to add to it. So if you notice me missing, just assume my life is hitting the fan and I'm hunkered down in a corner somewhere trying to stay clean. Around here, 2013 was a messy year -- I won't miss it. And given how the beginning of 2014 has starting out, I am hesitant to be hopeful.

Although I am happy to report I survived Polar Vortex 2014 relatively unscathed. The boys left for Florida on Saturday to visit my in-laws. Being sickly, I stayed behind to hold down the fort. Luckily my brother was in town for a conference so he was able to help with shoveling. I snapped this next photo at the beginning of the storm. In the end the trees here didn't fare well, but we were considering cutting down that little one by the barn anyway. 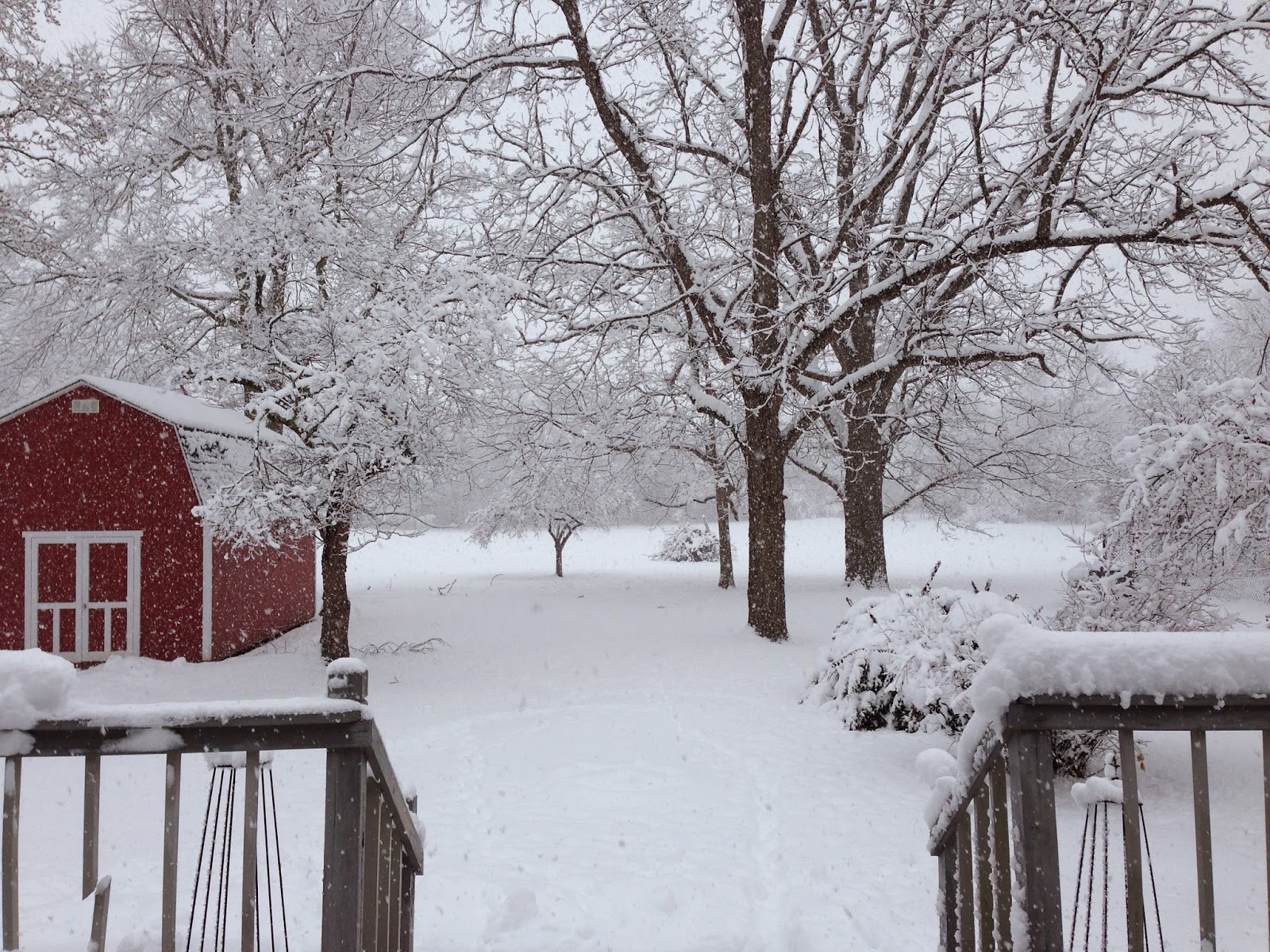 Half way through the storm I snapped this shot from the side porch; two minutes later I couldn't even see the bird house. 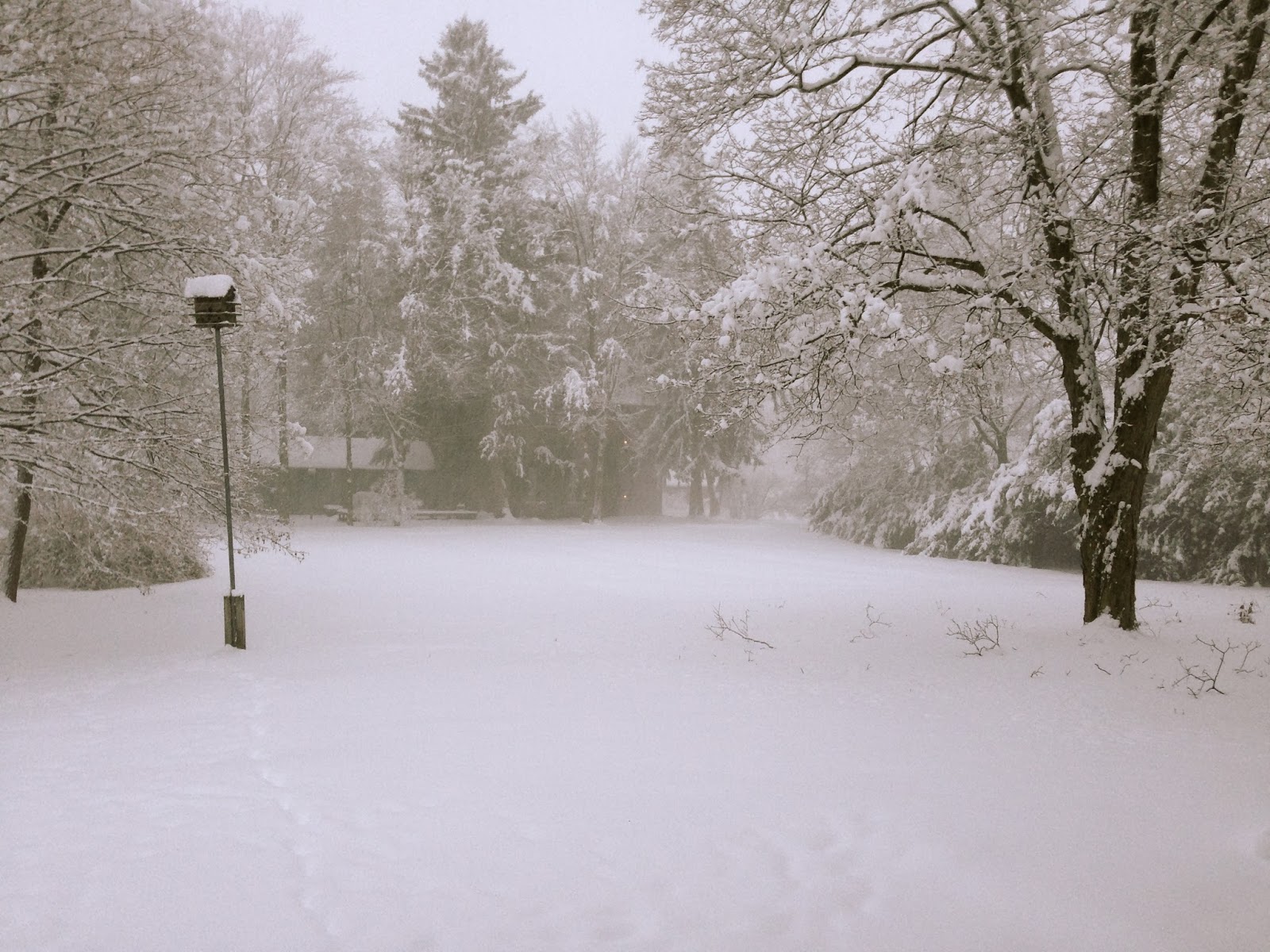 By the time the storm was over another 10 inches of snow had fallen and the temperature had dropped to a wind chill of -41. You'll just have to believe me because I didn't feel the need to go outside to take any more photos! Instead I stayed inside and worked on projects, read books, baked and generally enjoyed being a hermit. I don't understand folks who get cabin fever; I'll never live long enough to finish all the things on my to-do list. By the time the guys returned most of the snow had melted. It was almost as if they planned it that way.

I can't show you the projects I worked on since they are gifts, but I can finally show you the purse I made for my mother. I am embarrassed to say she asked me to make one of these several years ago and it somehow just never happened until December. 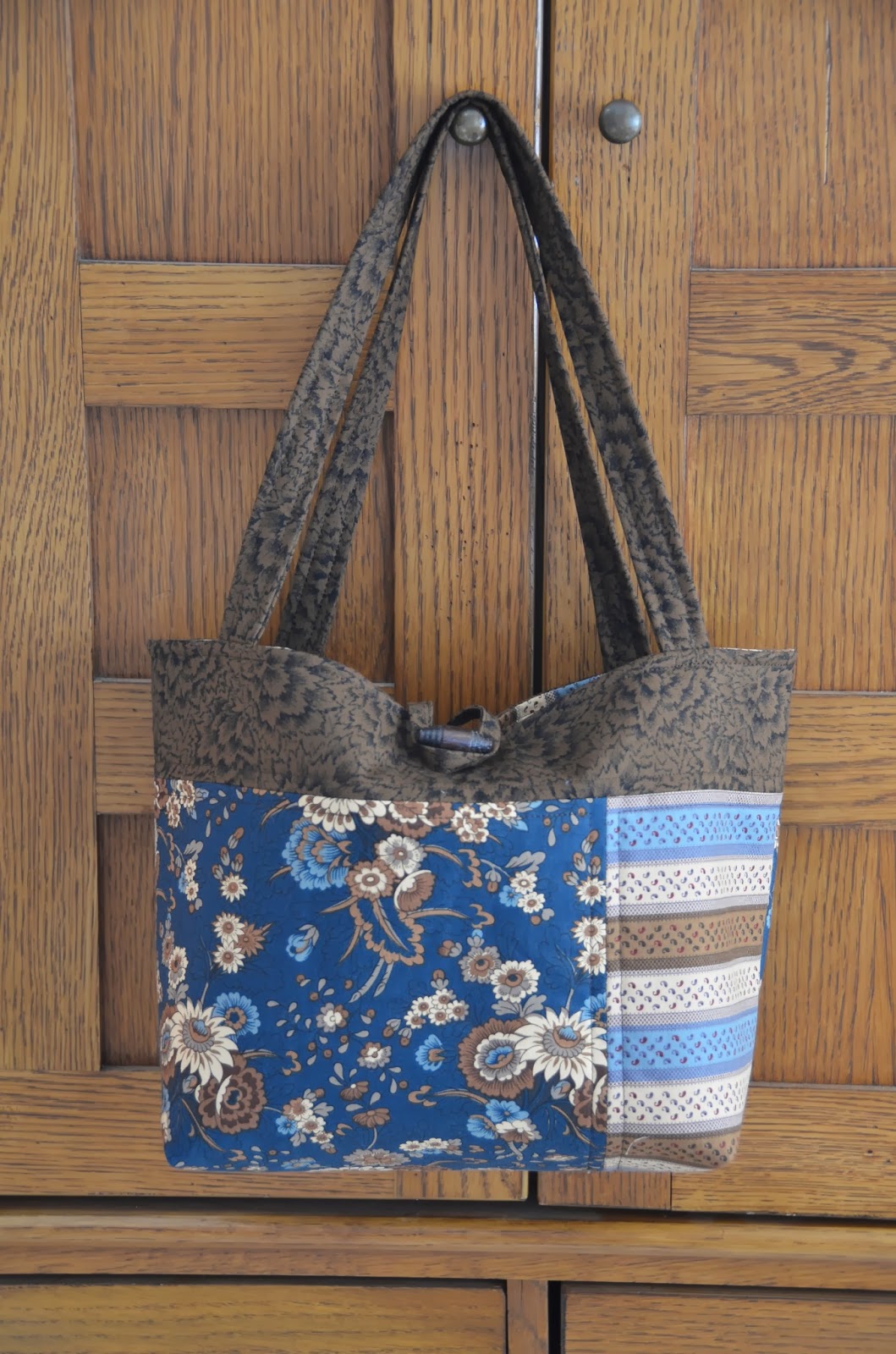 I can also show you the adorable matching hats my sister-in-law designed for my daughter and granddaughter. Aren't they cute? 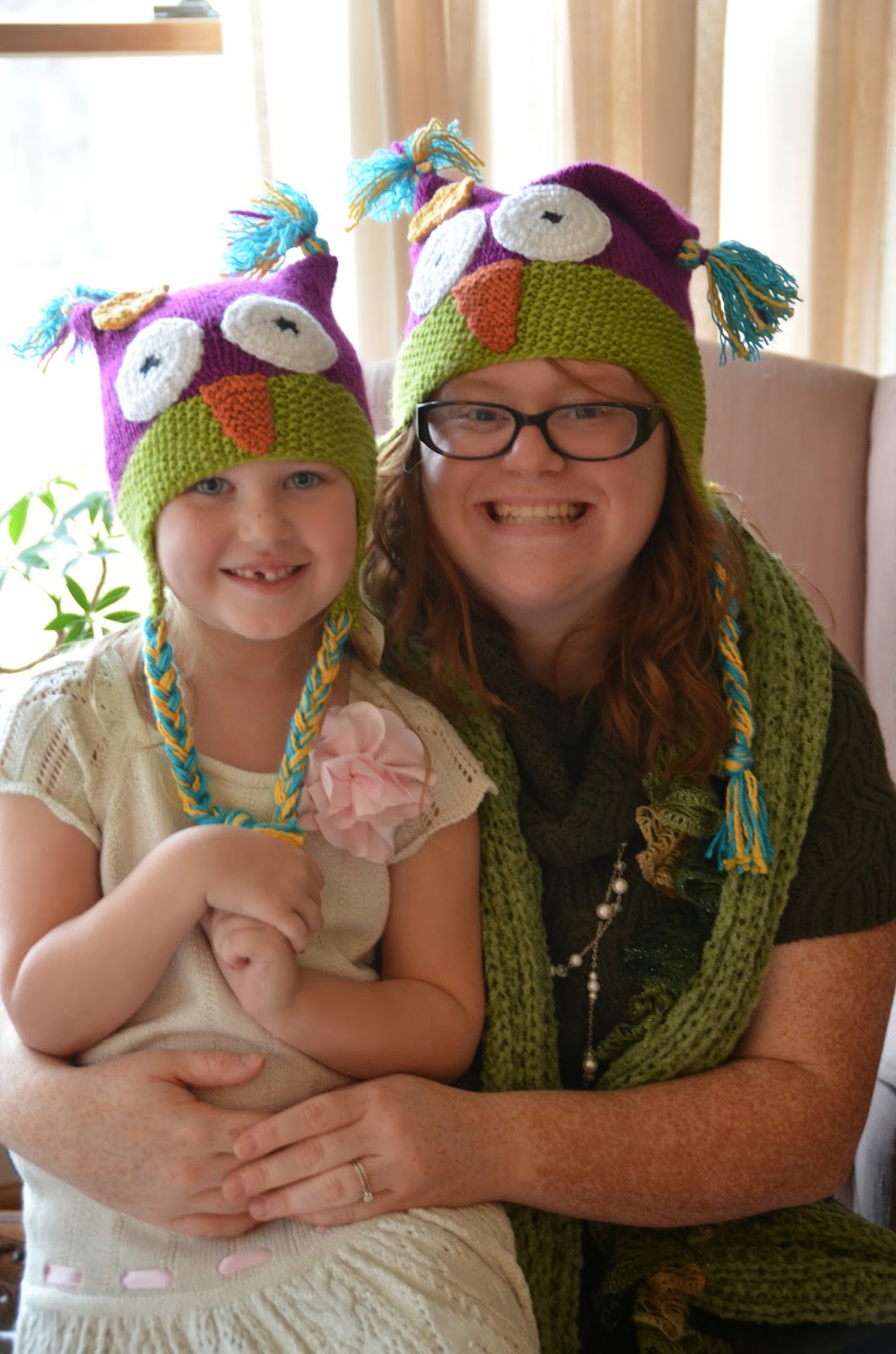 So there you have it -- an update from me. You might have noticed I've chosen a new look and name for the blog. It is time for a change. Front Porch Indiana was what the previous owner of the old farm called that house. We are now settled in here at the new place and it is time to move on. Tenth Street Textiles more accurately describes what this blog is all about.