Minerva J. Freeman and her two brothers grew up on a 120-acre farm just north of Madison, Indiana. Her mother, Mary, passed away only two short months before Minerva married William T. Hinton. Minerva's father, Owen, passed away nine months later, leaving the farm under the care of her brother, Wm H. Freeman.

In 1860 after their son, Charles, was born, William and Minerva moved away from the farm and into a fine home at 408 W. Third Street in Madison, Indiana. 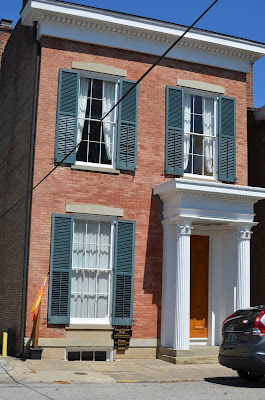 Built by the same architect as the Lanier Mansion, the young couple took great pride in their home--even going as far as installing their family name into the sidewalk just in front of the entrance. 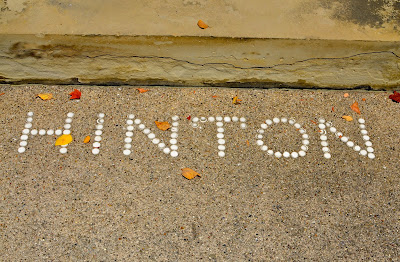 The door itself being somewhat remarkable in that, instead of opening wide like most doors, it slid to the side into a pocket to preserve the precious space inside the small entry. 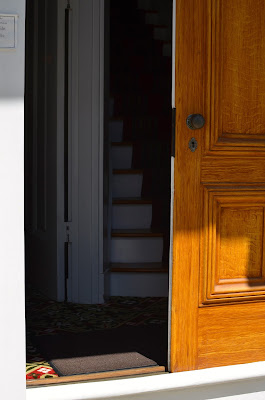 The front parlor, quite something with dual fireplaces and a curved front wall, was host to conversations about states rights, slavery, and the preserving the union. 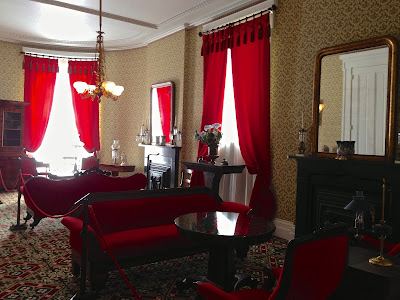 The modest dining room served as a venue for the new mother to display and perfect her domestic skills in hopes of impressing her husband and his associates. 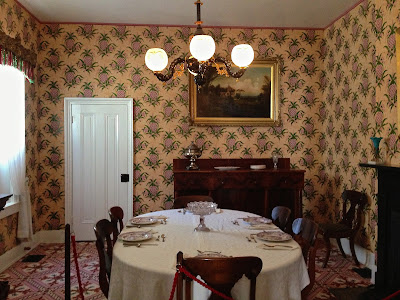 The space-saving double stairway led to the bed chambers. 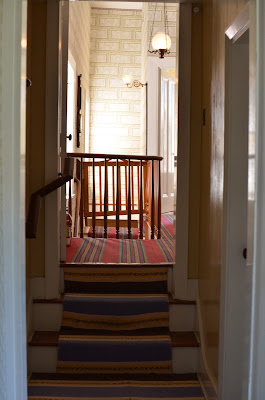 The room William and Minerva shared was large and enjoyed a fireplace along with not one, but two closets. A rarity for the period, but a feature of the home Minerva greatly enjoyed as she was an accomplished seamstress and no doubt had many dresses and accoutrements. 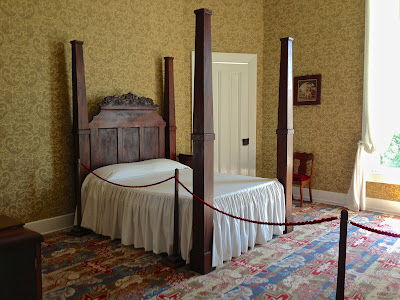 A door leads directly into their young son's room, which was plenty large enough for him to share when the time comes. 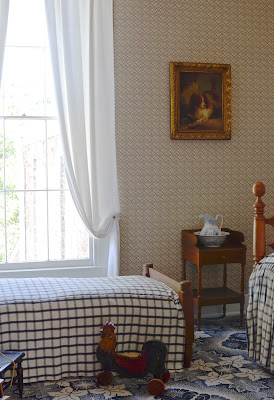 Young Charles though would never share his room as the Civil War put a halt to their family plans. On August 19, 1862 William enlisted in Company C, Indiana 67th Infantry Regiment. He participated in the battle at Munfordville, KY, was taken prisoner, paroled, returned to Camp Morton at Indianapolis, then marched to Memphis, TN on December 10th where he succumbed to measles. His grave site has never been found. 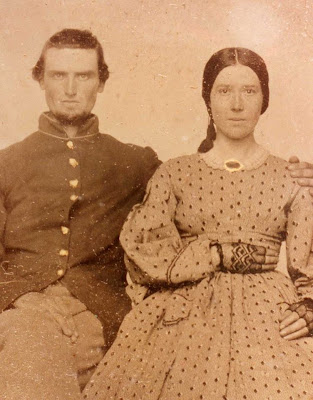 He was not the only soldier in Minerva's life, most every young man she knew was in the army. Shortly after receiving the news of her husband, her brother's name was found listed among the dead on the notice at the post office. She was left entirely alone, a widow at twenty-two, with a toddler to raise.

So while I was stumbling around the internet looking for hints on my ancestors, I ran across the following photo on Find-A-Grave.com. It is a picture of William T. Hinton, brother to my 3rd Great Grandfather. 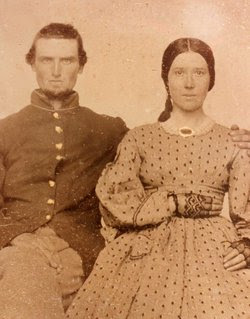 I recognized him immediately as looking an awful lot like my grandfather, David Hinton. Same stern expression with the eyebrows and nose creating a capital T. 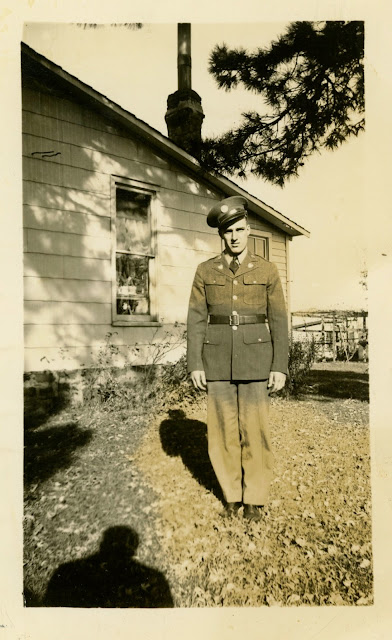 So I contacted the person who posted the photo to find out where he found it. Tom explained that his great-aunt had given the photo to him along with some others many years ago when he was a child. She had married one of the grand children of Charles Hinton, the only son William and Minerva had before he died during the war. She gave them to Tom because there were no other Hinton's to give them to. 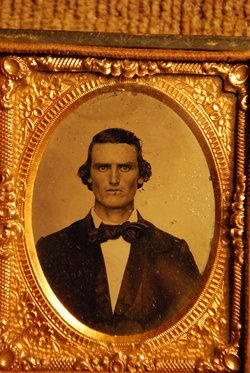 He also had the photo of William above and an old photo of their home in Madison, Indiana. This home now just happens to be on the historic madison tour. 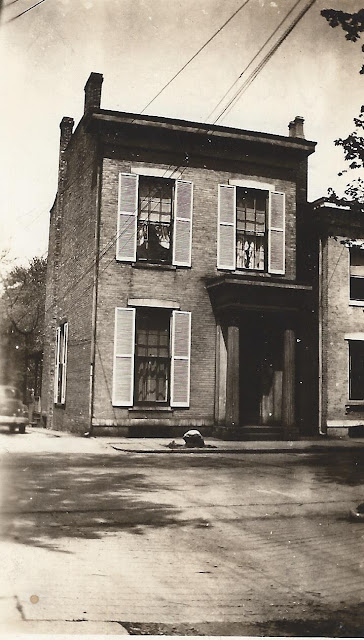 I explained why I was searching for information about William and Theodore. He then told me that he was a history teacher. He applies a unique method of learning for his students by assigning them a project each year. One that I think you all will find both interesting and inspiring. This video was made by The Wall Street Journal.

What are the odds that I would stumble upon this person who shares my passion for uncovering the truth and using that information to teach?  This is when the hair on the back of my neck stood up.

Call it a Calling

So back in April of 2012 I wrote the following blog post:

"Last year, Conner Prairie opened a new experience area called Civil War Journey. The experience is based on confederate officer, John Morgan’s, raid on Indiana during the Civil War. Guests arrive to find what is left of 1863 DuPont, Indiana, the day after Morgan’s raiders pass through and need to decide if they will sign up to join the Union in pursuit of Morgan and his men or stay home and protect their families and property.

Also last year, my son and I started participating in Civil War reenactment events; particularly, events in Southern Indiana, which represent this same historical raid. Knowing we had ancestors who served during the Civil War, we decided to do a little more research. We discovered that my 3rd great grandfather, Theodore F. Hinton, lived near DuPont, Indiana, and was one of the men who joined the 7th Indiana Cavalry immediately after Morgan’s raid to pursue John Morgan. But what is even more interesting is that his first cousin, Benjamin T. Butler, was a member of the confederate 5th Kentucky Cavalry and was one of the men doing the raiding.

So…I just happen across a  job at Conner Prairie. And then…I find out they need a volunteer to help this summer in the Civil War Journey area. My son just worked his first day at it today and will be spending his summer at “The Raid” which represents his 4th great grandfather. I think that is pretty cool.

And if that didn’t raise the hair on your neck…I met Milah online because my blog is called Front Porch Indiana. Hers is called From My Back Porch. We made an instant connection and ended up taking a road trip through Kentucky where I met up with another blogging pal, Sara at Punkin’s Patch. We passed a sign that read “Hinton” on the way to her house. Come to find out, my ancestors settled that area of the country and, in fact, a Hinton descendant is Sara’s next door neighbor.

Coincidence? I think not.

I’m just following the plan. I don’t know what He has in store for me, but I don’t doubt that I’m going the right direction."


Many changes have happened in my life since the day I wrote that. I can see now that I am not just being led down a path, it is more like I am being shoved off the gang plank. I had planned to write a book loosely based the story of those ancestors someday. I figured it would make a good young adult novel, nothing too serious yet adventuresome. I thought I would need to make up most of it. However, over the past year I have met some incredibly interesting people and have made some interesting discoveries. I am now realizing there is a much bigger true story in my ancestry than I first thought. So big now that I am having difficulty narrowing the focus.

It all starts with Asher and Nancy Hinton who lived near my friend in Northern Kentucky. They were farmers and raised nine children. Those children blessed Asher and Nancy with many grandchildren, ten of which went on to be soldiers in the Civil War. Those that settled across the river in Madison Indiana all fought for the Union. Those that remained in Kentucky were divided, four of them joining the confederacy under the command of John Hunt Morgan, two of them joining the cavalry that pursued him. After studying the timelines of the various units it appears the cousins fought each other on multiple occasions. Some were in the great battles such as Shiloh and Chickamauga others spent most of their time building corduroy roads. One, William T. Hinton, died of measles near Memphis leaving behind a wife and child. I happened to run across one of his descendants, but more on that later. 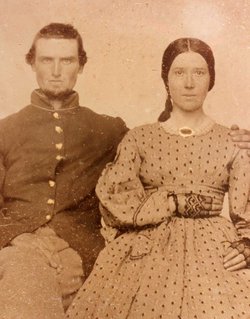 Two of the rebels were captured after Morgan's Raid and were kept as prisoners of war at Camp Douglas in Chicago, the northern equivalent of Andersonville. Only one survived the ordeal. I think I am being shoved off the plank in order to answer the obvious questions. Why would a family that never owned a slave become so involved in the war? What was so special about John Hunt Morgan that four of them would sever their family ties to follow him? And how did the war change that family forever?
Posted by Christine at 8:17 AM 11 comments: