Weaving, I have discovered, is providing me with both physical and mental therapy. It is good exercise for my shoulders and gives my brain a bit of a workout as well. I am working on a set of dish towels now. When my shoulders start to ache I take a break to work my way through an old weaving textbook in an attempt to fully understand weave structures. I am learning a tremendous amount. The only problem with this is I now desperately wish I could afford to trade in my four shaft Baby Wolf loom for an eight shaft. The eight shaft patterns are far prettier. 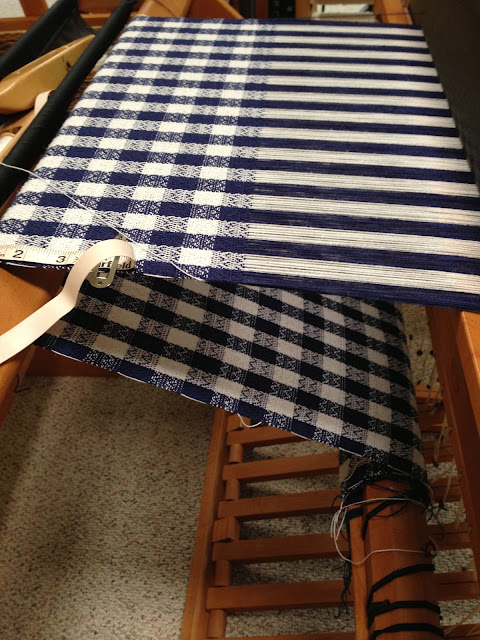 During one of my breaks I stumbled upon a YouTube video series called Mastercrafts - Weaving. It is more or less a BBC reality show with three contestants immersing themselves in a six-week intensive weaving course. It is interesting and highly entertaining. If you have any interest at all in understanding what the process of learning to weave entails you should at least watch the first video.

It has been a long year. A long frustrating year and it is only June. When I look back on my life it seems to always be feast or famine on the frustration scale. Here lately they have been crammed down my throat on a daily basis. I've reached the point where I am ready to tell everyone and everything to take a flying leap off a high bridge.

Fortunately, just when I needed it, I scored a shift in the loom house at work. I always enjoy working there and sharing my love for all things wooly, but I was particularly happy to get a chance to work on the Civil War reproduction coverlet that is on the barn loom. It is tedious and a challenge to work on while speaking with guests, but they are fascinated by it. 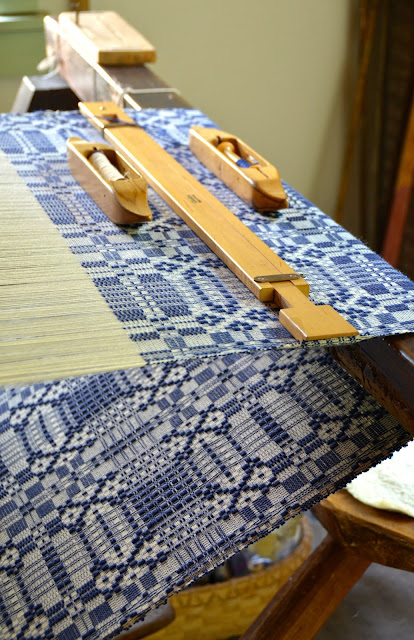 The design is an exact reproduction of a coverlet found in a photo of Abraham Lincoln and George McClellan at the Battle of Antietam.

It is slow cloth in the truest sense; a puzzle for my brain to keep track of where I am in the pattern. It is creating the distraction from life I need right about now. 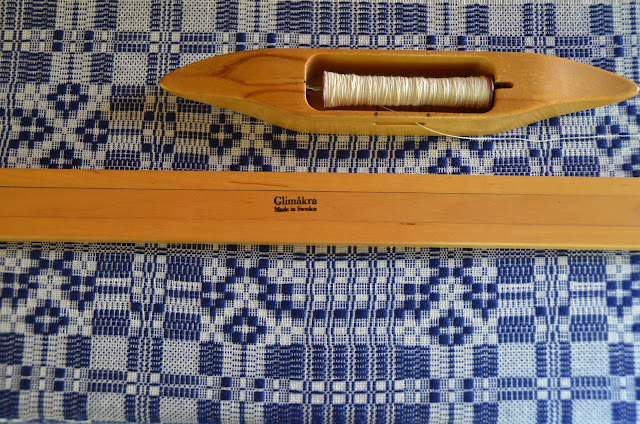 I think I may even dispense of the usual advice and try this at home.
Posted by Christine at 7:24 AM 11 comments:

The Eighth Wonder of the World

It was a fact finding mission. Yeah, that's what we'll call it. A two-fold research project. I spent this past weekend traipsing through the southern part of the state. Primarily to see the Eighth Wonder of the World also known as the Carlsbad of America, the West Baden Springs Hotel. Built in 1902 the hotel’s atrium was the largest free-span dome until the Houston Astrodome was constructed in the 1960's. 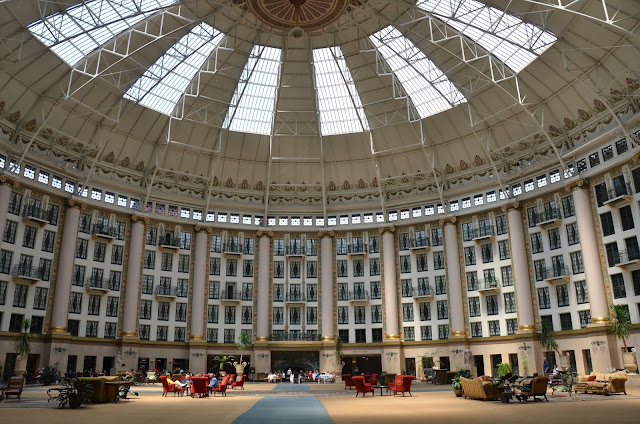 With the reputation of the Eighth Wonder of the World, ads claimed the resort's mineral baths and drinking waters could cure everything from sterility to senility. 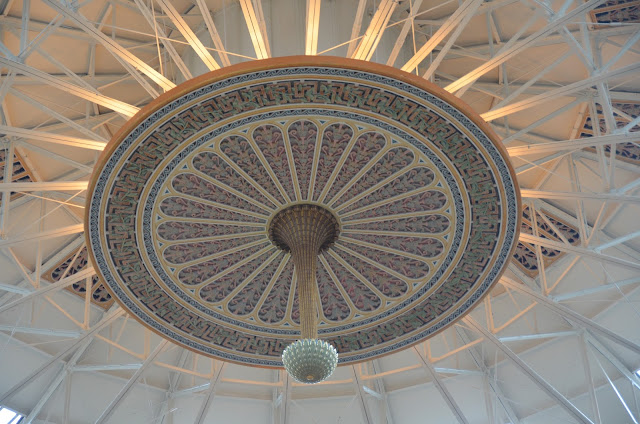 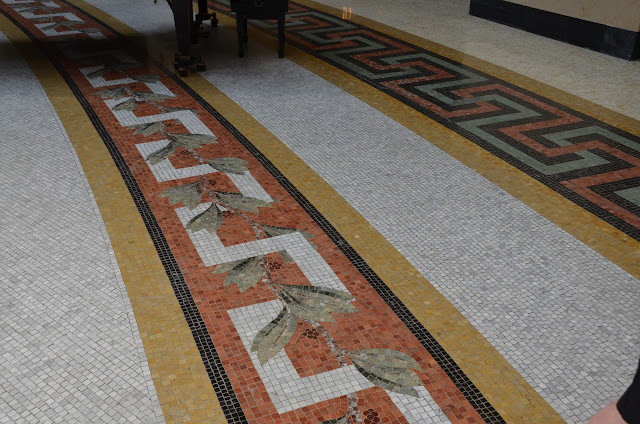 You could spend hours just looking at the floor. 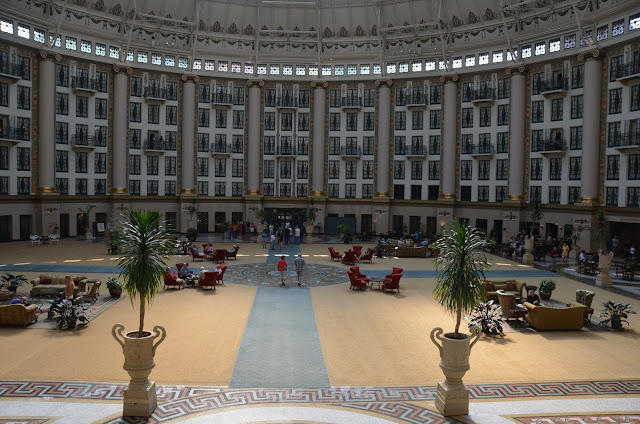 But if you look up you see amazing things there as well. Forty rooms with balconies line the atrium. 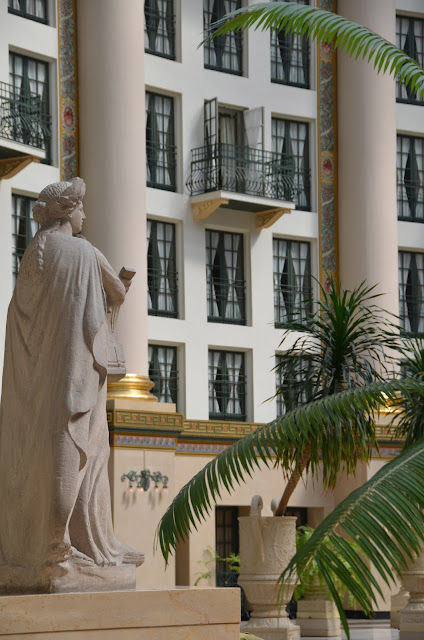 The decorative painting is phenomenal. 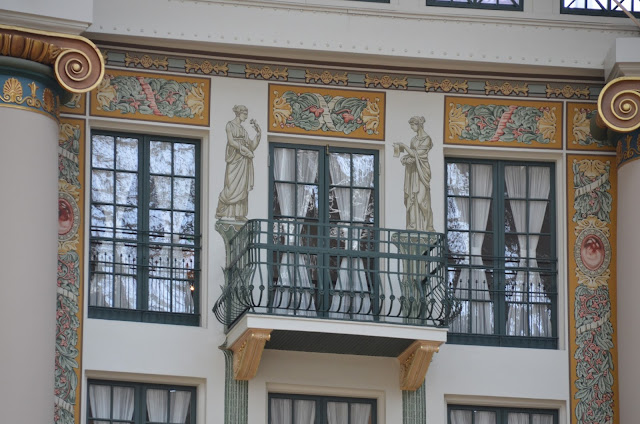 But really I am getting ahead of myself. In order to get to the atrium you first have to arrive at the hotel via a long tree-lined brick lane. 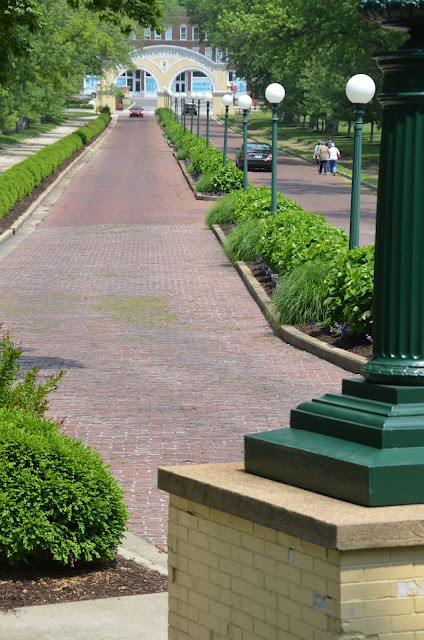 The lane leads you to the lobby which is surrounded with covered porches. 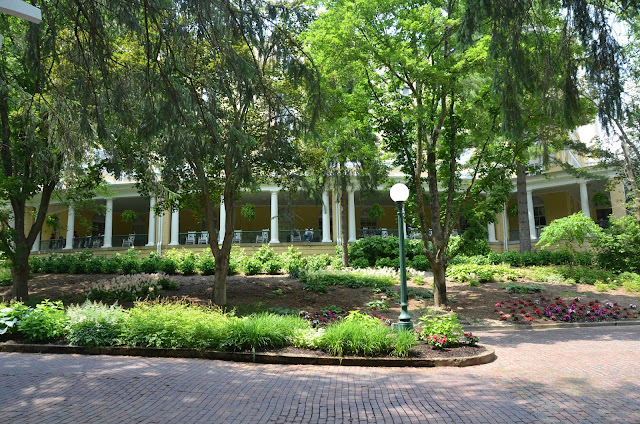 Here you can rock away enjoying your beverage of choice while you watch the rich and famous arrive and depart. 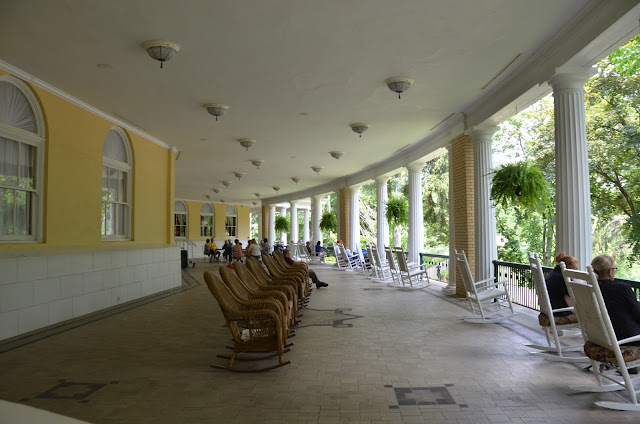 You can also look out onto the sunken garden. 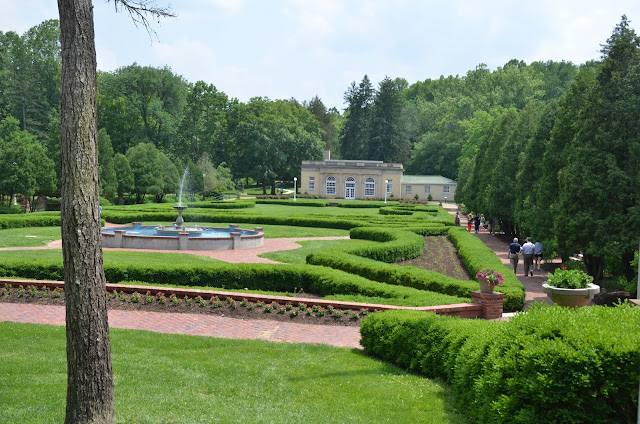 The lobby entrance is noted with an inlaid family crest. 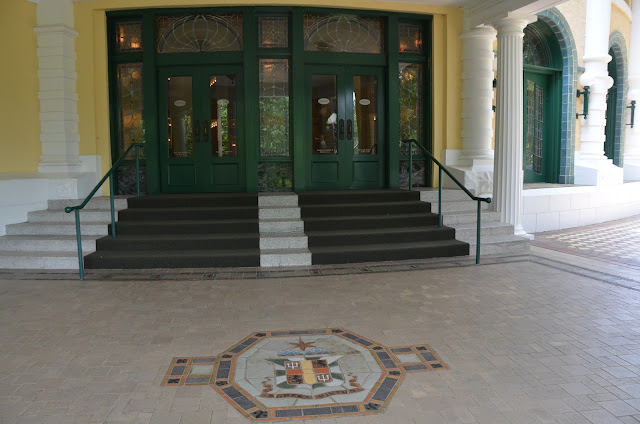 The lobby was designed to warm a guest up to the idea of a grand space. Just look at all that tile. 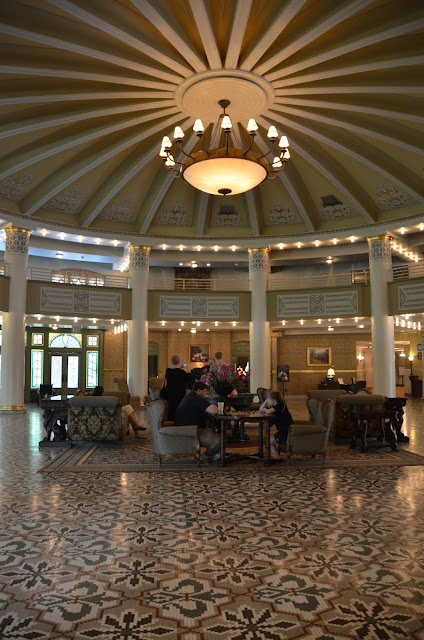 Since this was the Eighth Wonder of the World they didn't want to blow peoples minds too quickly by entering the atrium directly. The lobby was used as a social hall where victorian men and women could co-mingle. 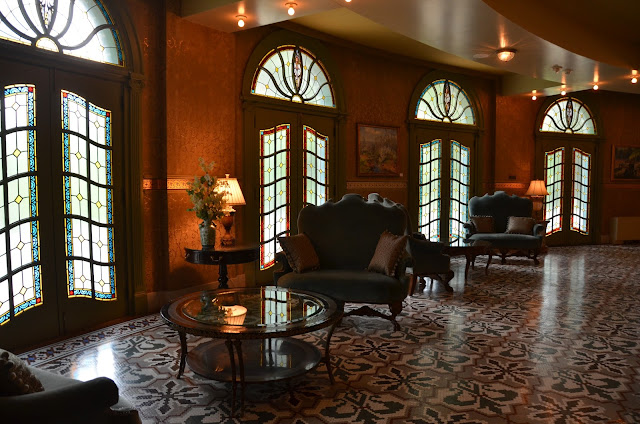 Of course, as was the fashion, the sexes also had their private spaces. The men had a lovely library. 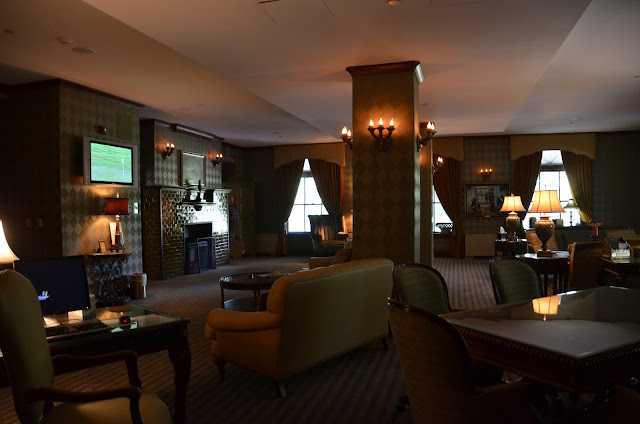 On the other side of the lobby the ladies had a beautiful sitting room which the hotel now uses for small gatherings, you know, in case you don't want to rent the entire atrium for 5,000 of your closest friends. 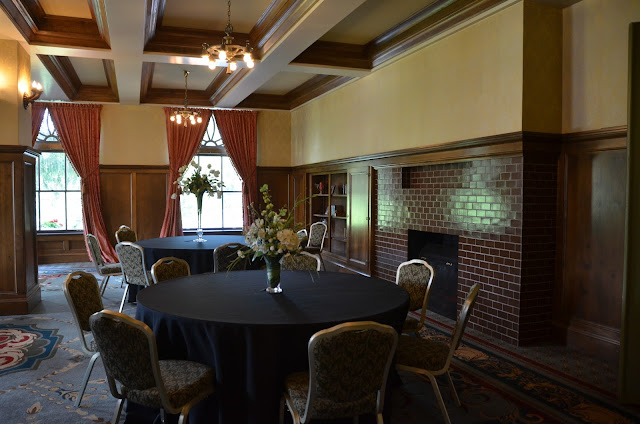 The entire hotel is a circle built around the atrium, the lower level is used primarily for rented meeting spaces like this or some lovely shops and restaurants. Even the old barber shop boasts it's original tile and marble shoe-shine stand where hotel artifacts are on display. The stick with the glass is what the Rockefeller's and their friends used to dip into the springs to "take the waters," which we now know was laden with lithium and also worked as a laxative. 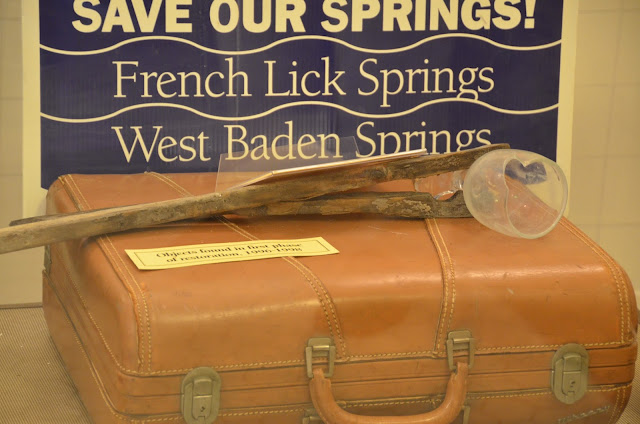 During the restoration project the beautiful stairways were relieved of some of their workload when elevators were installed to help guests reach their rooms. 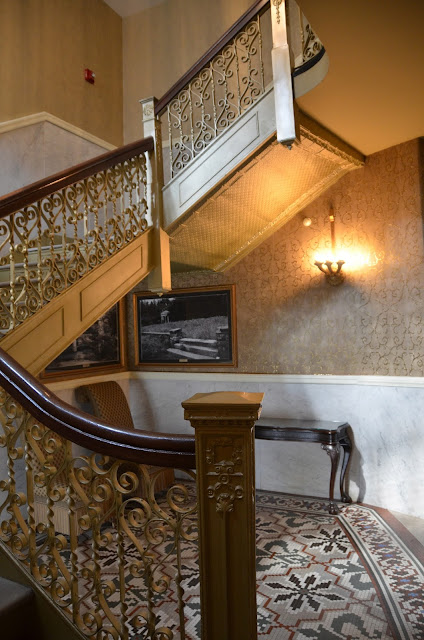 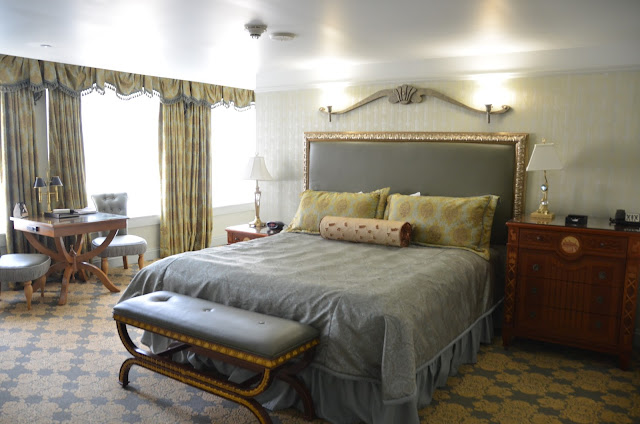 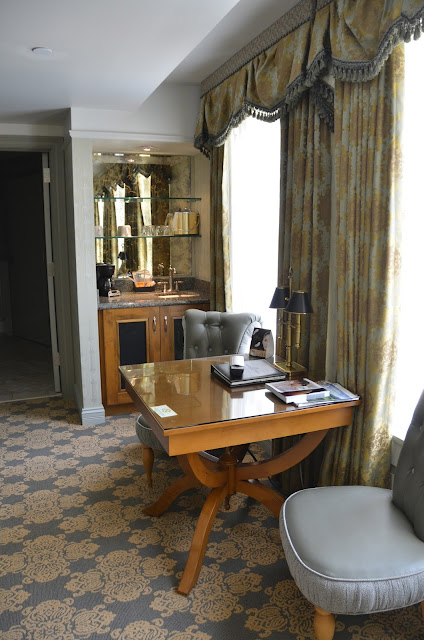 Historically decorated but with all the latest amenities. 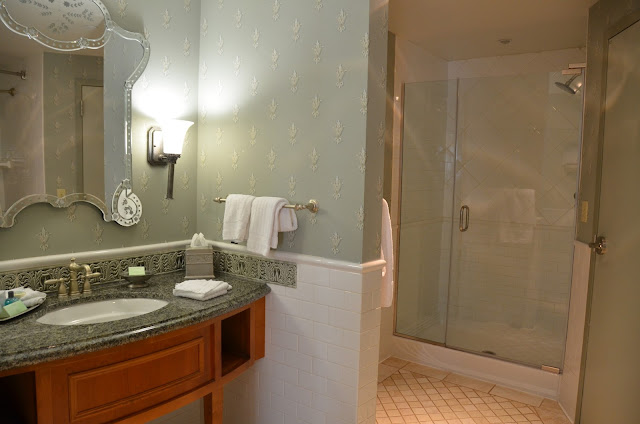 No expense was spared on the renovation. They even went so far as to have custom furniture made with the hotel image inlaid. 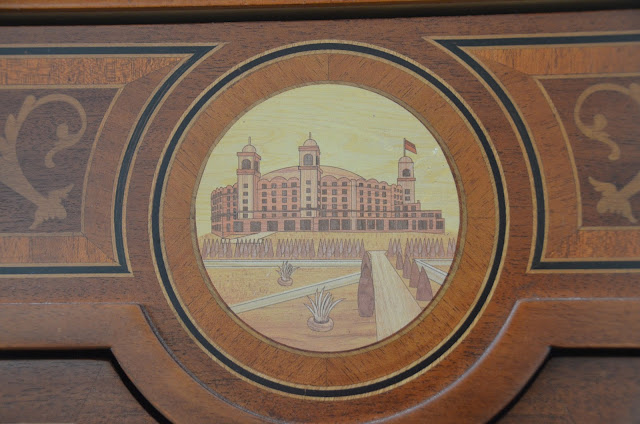 It is hard for me to believe that this grand hotel once sold for $1.00 after the great depression! Thank goodness Indiana Landmarks came together with the Bill and Gayle Cook family and were able to bring it back to life. I know for sure I will go back again to sip another drink on that porch and maybe hit the spa for a facial. You know, in the name of historical research. 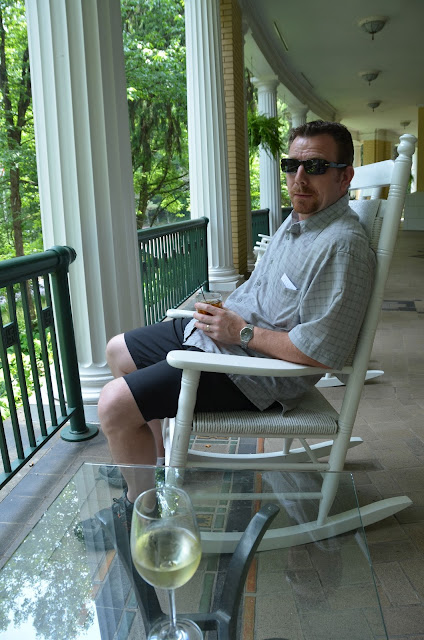