I might have taken a few too many pictures of Mine getting her first haircut. By the amount of photos I just uploaded you would think she was the only one shorn today. 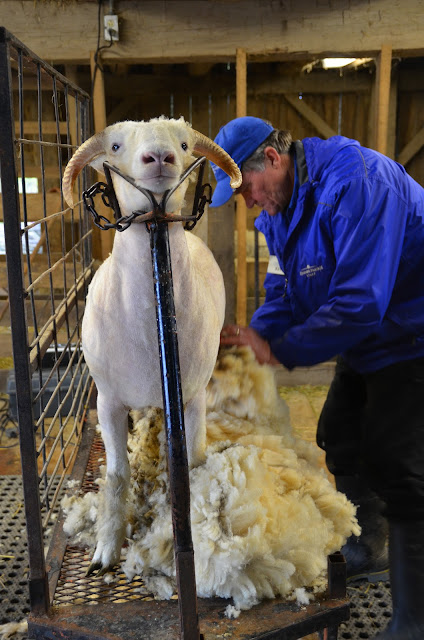 She wasn't, we sheared lots. And, in fact, we even sheared a couple of llamas. 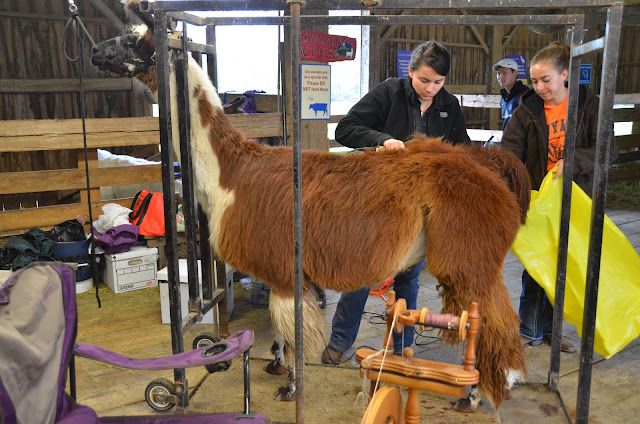 One with a surprise inside...polka dots! 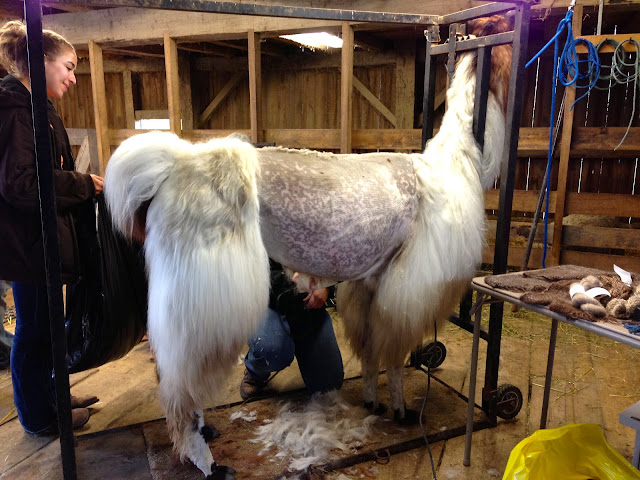 I have to say the biggest transformation though was Primrose. 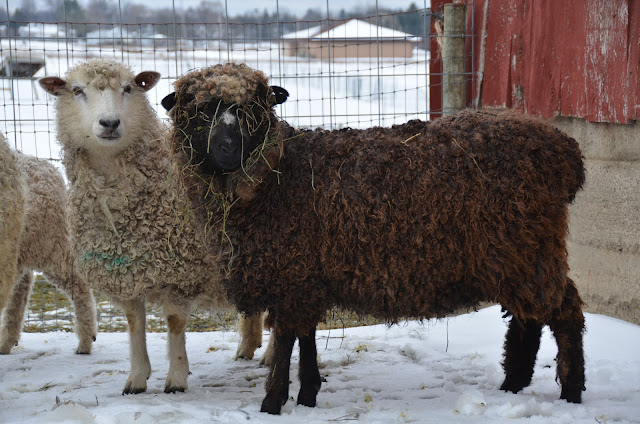 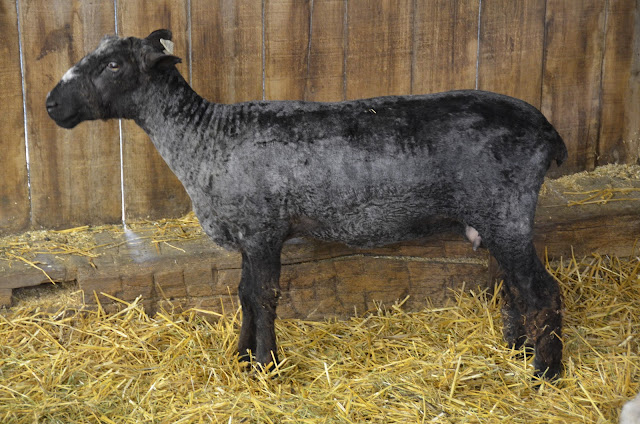 No really, that's the same sheep. I swear. And that's not grey wool, she's just as shinny as a new penny.
Posted by Christine at 5:56 PM 6 comments:

I work with some of the best professionals in the business. This gal's name is Begonia. She provides milk for the bottle babies. She is an amazing interpreter, allowing anyone and everyone a chance to milk her. She is always calm, cool and collected. I love her. 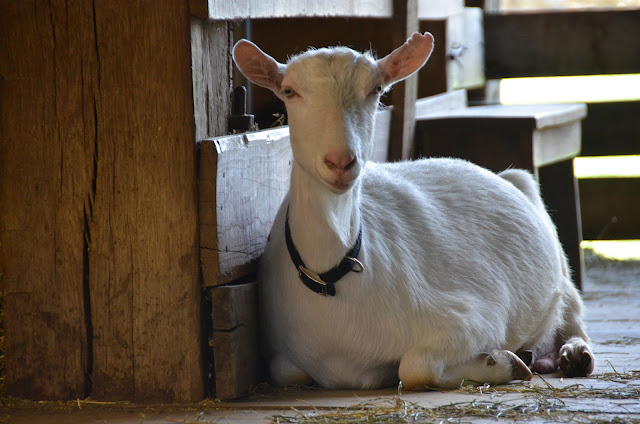 This fella is known as The Ram. Friendly, touchable and willing to stand patiently while the process of shearing is described for educational purposes. In fact, I think he enjoyed his time in the spotlight a little too much. He was chewing his cud and acting all cool. He might be a bit of a show off. 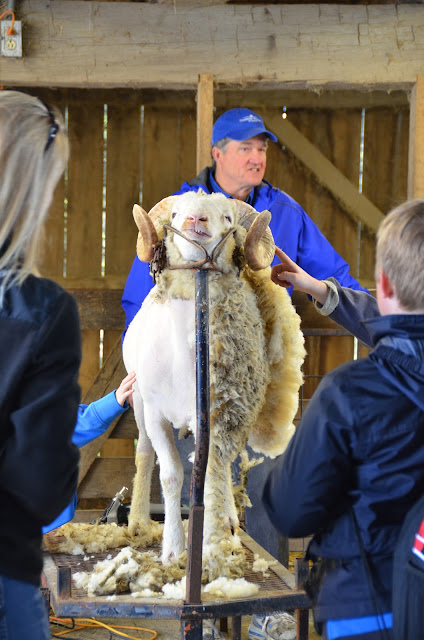 Then there's this guy. Small in stature, yet huge on charm and personality. We call him Raymond because everybody loves Raymond. He causes more squeals from young girls every day than Justin Bieber. He's a rock star and he knows it. Today he was even filmed for a TV special. We might need a bigger pen to keep his ego in from now on. 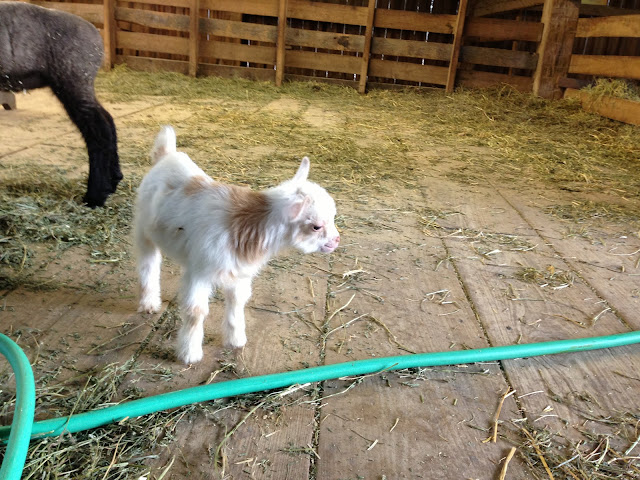 Plan B, it's a Lifestyle.

I'm not one for pity parties. It drives me crazy to read or listen to someone complain about how hard their life is. I always manage to think of someone else I know who is worse off. So I try to avoid the complainers and keep my own self in check. Granted, I am human and so I've caught myself complaining on many occasions. In the grand scheme of the world right now, I have absolutely nothing worthy of complaining about. So I'm not going to complain. Nope, I'm not. However, I am going to express my displeasure at the technical difficulties I have been experiencing lately. I'm not complaining. I'm just frustrated and need to vent.

Pretty much every aspect of my life has run into some technical difficulties lately. The house for instance. You might recall the giant Petri dish of West Nile Virus in our backyard, aka the pool? Yeah, after a few quotes on getting it repaired, I decided no way am I paying that much money to get a sunburn. Instead I will implement Plan B and fill that crater in. 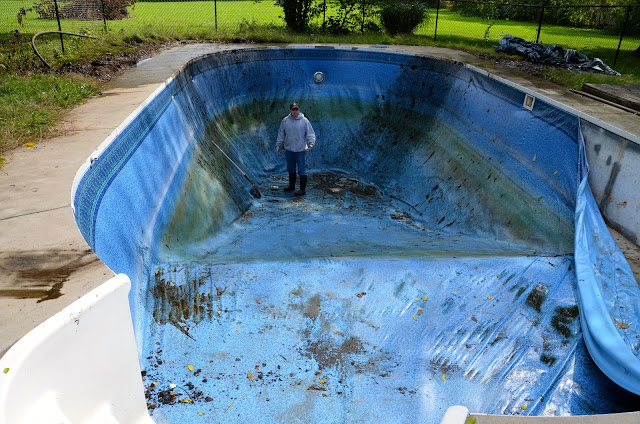 Then there's the garage. What garage you ask? Yeah, that's the point, there is no garage. After spending the last six months scraping ice off my windshield, I would very much like to have a garage. So I called up an architect friend of mine who also loves old houses. He came up with a beautiful plan to add a Victorian porch to the awkward 1970s addition while connecting the garage in an eye-pleasing, more historically accurate way. Its location would also help privatize the back yard. I loved it. He loved it. The hubs loved it. All systems were go except...we smartly decided we should probably figure out where everything is buried in the yard before we started construction. So we called a company and they came out with their ground-penetrating radar.  Three hours later, wouldn't you know, the septic tank and fingers are located exactly where the porch and garage were going to be. Exactly. Almost like it was planned that way. The architect is now working on Plan B.

At one point this winter, my arms fell off. I know that sounds like I'm being sarcastic, but they really did. The only thing holding my shoulders together was the skin. You see, they tell me I have
Joint Hypermobility Syndrome. It makes total sense to me now and explains so many issues I've had all these years. I thought, at first, all I had to do was go do some physical therapy and I'd be good as new. I've been working at it for 8 weeks or so now and had been feeling pretty good about my shoulders. Then I tried to wrestle a goat. The goat won. And I'm now I'm back to Plan B.

My mother would have to confirm this, but I suspect I was probably one of those independent little children that went around saying, "No. Me do it." I've never really outgrown that independent streak so you can imagine how overjoyed I am to be sitting around waiting for other people to do things for me. Today, with a little help, I managed to get one set of curtains hung. Aaron has been patiently living with those frilly lace curtains in his bedroom all this time. Luckily it bothered me more than it did him because at the rate I am going, it is going to be December before I'll get the other two up. The rods need replacing, but my shoulders have decided they don't want to participate. I'm now sitting on the porch waiting for Plan B to come home. I'm not complaining, just struggling to accept those things which I cannot change. Like the curtains... 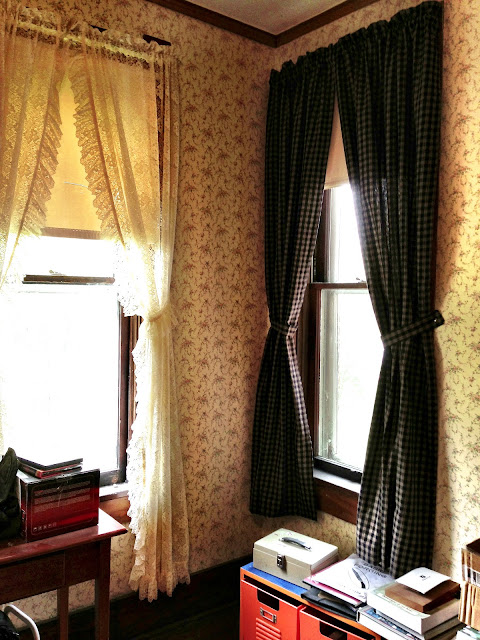 I just knew Primrose, the Leicester Longwool, would want her own private birthing suite. I probably would have chosen the same really. She had two ram lambs in a very private part of the pasture yesterday afternoon. No drama. No fanfare. Just behind the scenes getting the job done. That's my girl! 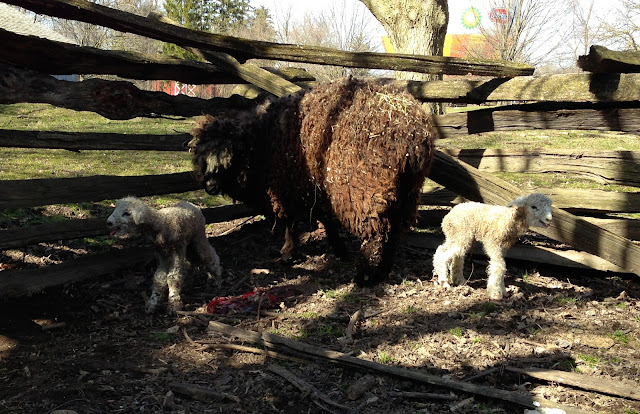 The boys are well and enjoyed some time under the heat lamp since it was still chilly here yesterday. 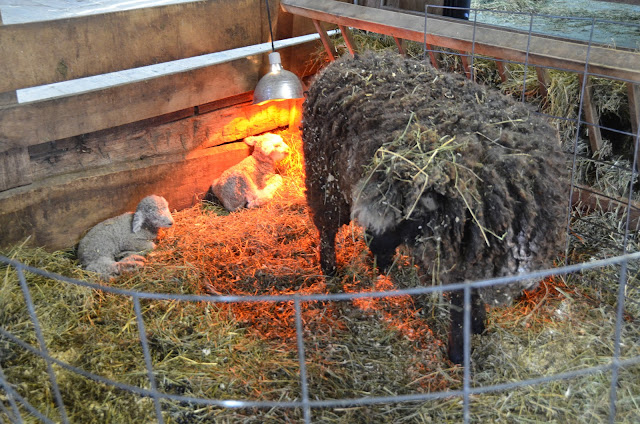 I cannot wait to shear her. Not only because I want to get my hands on the fleece, but the poor thing can hardly keep track of her babies with all that wool in her face.  And hay. And sticks.  And God only knows what else. She's like a giant Swiffer sheet.
Posted by Christine at 12:45 PM 11 comments: 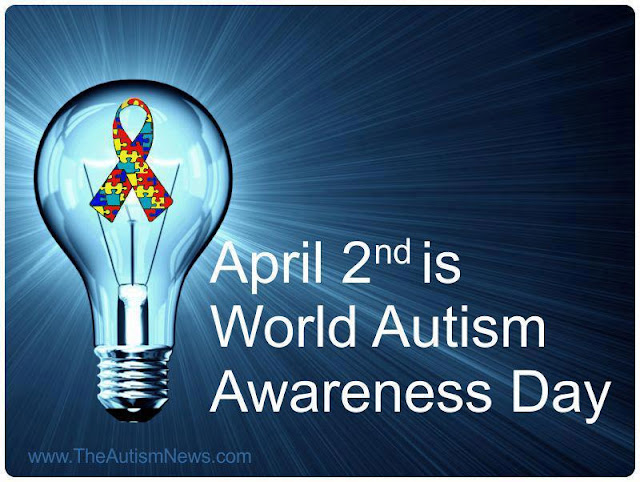 Please visit http://www.autismspeaks.org/what-autism to learn more about autism, then go teach others, especially children. The world will be a better place if you do.
Posted by Christine at 7:18 AM No comments:

A Barn Bursting with Babies

It must be Spring, because the pitter-patter of little feet can be heard non-stop in the Animal Encounters barn. Conner Prairie partners with select Indiana family farms to raise a wide variety of bottle-fed newborns. So far this season we have two bull calves, an Angus and a Simmental/Angus cross. Their gentle nature, cute faces, and ridiculously long eyelashes are sure to please. 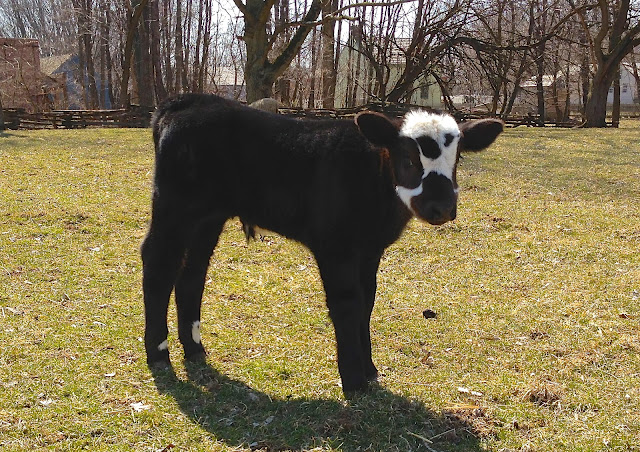 The Nigerian Dwarf is a new rare breed to Conner Prairie this year. The pint-sized caprines only grow to about 20 inches tall. Their small stature means they do not require as much space or feed as their larger dairy goat counterparts and their gentle and friendly personalities make them good animal projects for small children in 4H or FFA. The females can produce up to 2 quarts of milk per day or more. So far this season, we are finding they are also just plain cute and fun to be around. Every morning it seems like they are training for the Goat Olympics. Some are better at their dismounts than others. 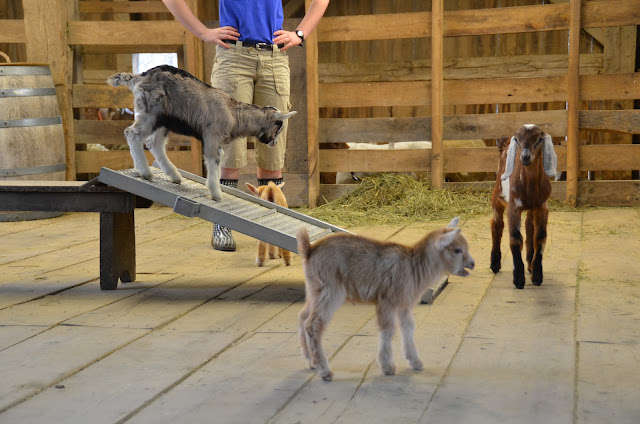 A Boer goat mother and her young doe are here representing the modern meat breed of goat. The doe kid has decided napping in the exact center of the hay feeder is a lot like resting on a throne so she can most often to be found there or bouncing back and forth over the backs of the calves. Also visiting is a very sweet adult Saanen doe, named Begonia, that we are milking every day to provide milk for all those babies. 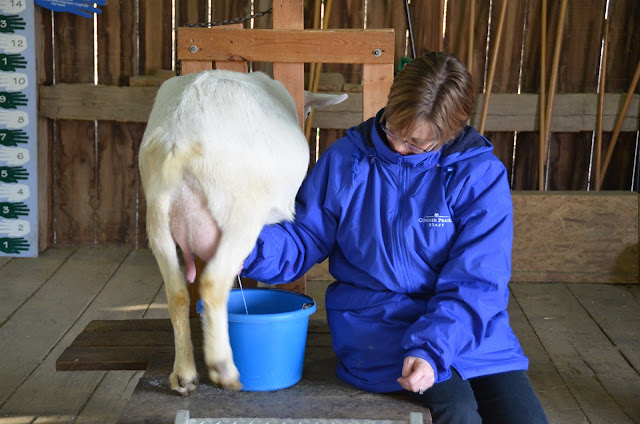 A Suffolk ewe lamb is the first of many lambs guests will spend time with this year. We anticipate Horned Dorset lambs will be arriving next, then soon after a few Tunis lambs. We have specifically asked the mothers to deliver the lambs during business hours so guests can watch. I think many will comply with that. Although the Leicester Longwool, another new rare breed for us, seems like she may have stage fright so we won’t hold it against her if she wants a private birthing room.

The Leicester Longwool is a critically rare sheep breed that we are proud to help preserve. Once popular in colonial times with farmers such as George Washington and Thomas Jefferson, the breed lost favor and became extinct in North America. Through the efforts of the livestock program at Colonial Williamsburg the breed was reintroduced to the United States in the 1980s. Conner Prairie invested in two adult ewes this season, one we believe is pregnant, and we are very much looking forward to the arrival of the lambs.
Between miniature goat kids and extremely rare lambs it is looking like it will be a fun and exciting season in the Animal Encounters barn this year.
Posted by Christine at 11:07 AM 3 comments: