I marked off another item from my to-make list this week. A wool appliqué framed piece for the breakfast room. I purchased both the wool kit and the bare wood frame at Back Door Quilts in Greenwood, Indiana. 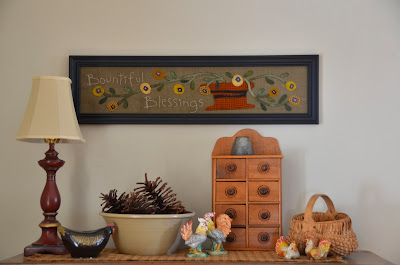 She Sat on a Tuffet

I just like saying that word - tuffet. Tuffet, tuffet, tuffet. It makes me smile. So this little bird on a tuffet had to be mine when I saw this kit at my local quilt store a few years ago. Then the poor thing got stuck in the waiting-to-be-made drawer while I got busy with other things. I finally gave her wings this week. 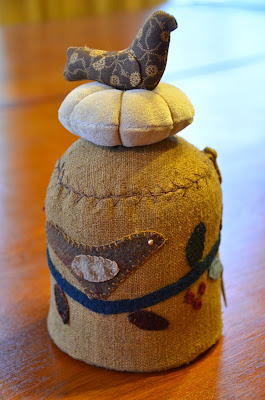 This project combines two different patterns in the book, A Bird in Hand by Renee Plains. 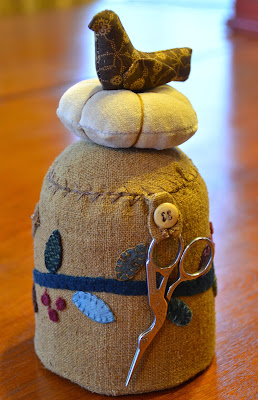 While I was in the mood for wool appliqué I also worked on this little travel sewing kit. 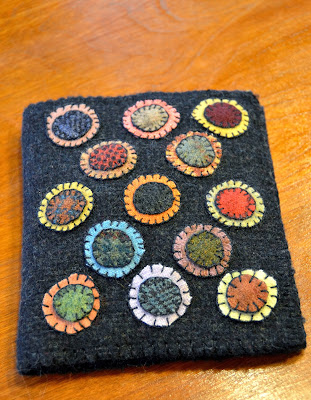 The inside has a pocket for a thimble and a few wool pages for needles. 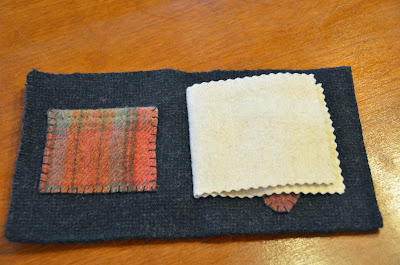 It also has a pocket for some embroidery scissors. 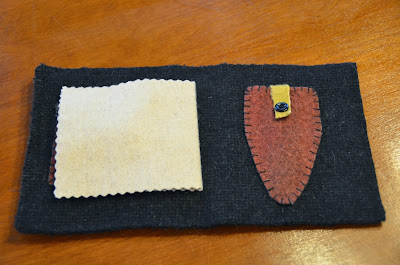 I saw two different classmates from high school comment on Facebook this week about how they were bored. I had to laugh. I've never been bored and I know I'll never live long enough to finish my to-do list. I'm glad I was able to mark two more off the list this week. Next!

My new cherry loom didn't come with a bench. While making the shuttle trap, the hubs casually mentioned that he could probably make a bench to match. (I think he was looking for an excuse to spend more alone time in his basement workshop.) A few weeks later this appeared. 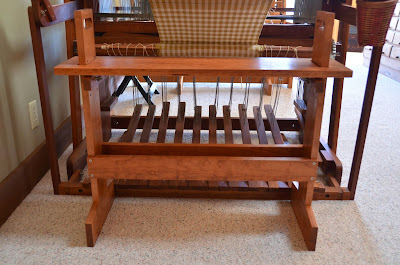 I've tried several different benches over the years and find I really like the adjustability of the Harrisville loom bench design. Only problem is they don't come in cherry. So he copied the maple bench in the far right corner of this next photo and made the one on the left. 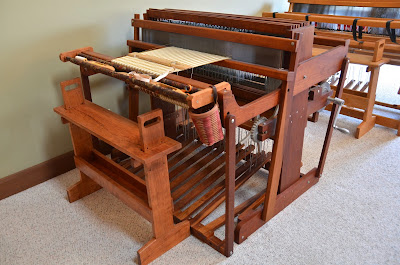 The Latest in Canine Couture

Lucy, our beagle, is eleven years old, she'll be twelve in February. For the most part she still gets around pretty well for an old girl. I noticed the other day that she's been shaking a lot lately. At first I thought she was just slow to pick up on the Harlem shake craze (old people are like that). But after she gave me the are-you-crazy look a few times when trying to get her to go outside, I finally figured out she's just cold (old people are like that, too).

Lucy isn't exactly a petite beagle. In fact, she and Large Marge have a lot in common. A fashionable ready-made dog coat for a plus-size beagle is about as hard to find as a good man. I finally decided custom couture was our only option.

I started by taking her measurements, promising her I wouldn't post those online for all the world to see, and sketching out a rough pattern on a paper bag. 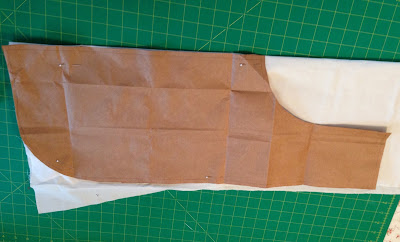 Then I made a mock up out of some unbleached muslin for her first fitting. 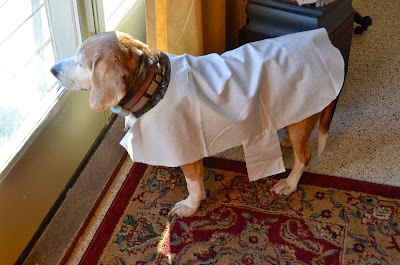 After a nip here and a tuck there, we found the perfect pattern to work from. I chose a couple of non-pill fleece fabrics from the craft store (they were 40% off, hooray!) Then quickly assembled the first bone print jacket together using velcro for closures. Ethel wanted to know if I could make her one with tuna fish. 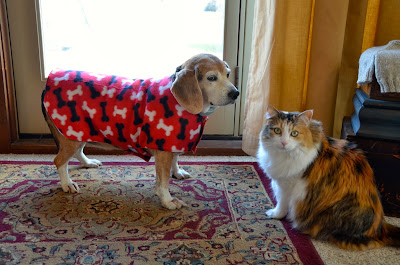 Then I made a paw print version. I really wanted to get the cheetah print because I think it would be hilarious to watch her slowly toddle around in that, but she doesn't like it when I laugh at her - maybe I'll make her one for her birthday. 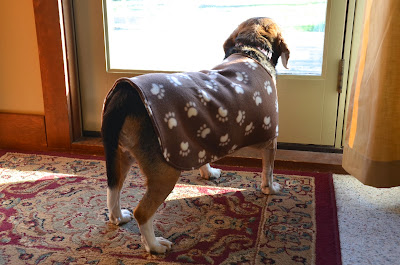 In the mean time these seem to be doing the trick, she doesn't mind going outside in the cold as much.
Posted by Christine at 10:56 AM 10 comments: