The Elephant in the Kitchen

We've tried ignoring it, we've pretended it wasn't there, but our big honkin' refrigerator stands out like a guy wearing pink. 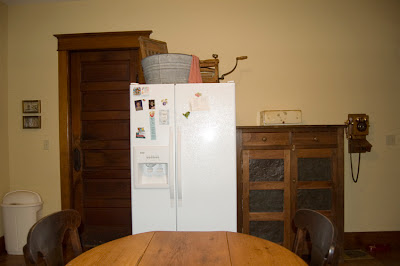 Overall the kitchen isn't in that bad of shape. It's not my dream kitchen but I've certainly lived with worse. I've always wanted an eat in kitchen with a farmhouse table. The location of the fridge drives me insane though. I don't think it was intended to be directly in the flow of traffic. I suspect the previous owners moved it there when they decided to partition off the back porch and add a door to what they called a pantry. 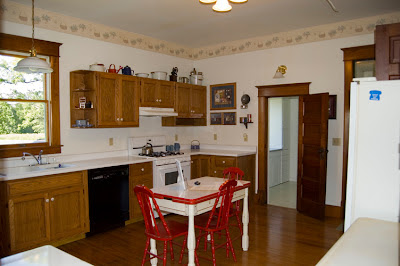 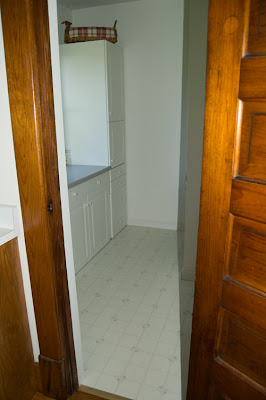 Another "upgrade" I wish they'd left alone. It's vinyl floor and melamine cabinets were lending nothing to the old fashion charm around here. And the two foot wide coat closet was grossly inadequate. It's a five bedroom house in Indiana for crying out loud. That's barely enough room to hold the spring outerwear, let alone the big-n-fluffy size winter coats and every other variety of layer known to man required to survive in these conditions.

But in spite of all that, I thought I could live with it for a while until we could get around to redoing the whole kitchen. Until one day earlier this spring when I decided to paint the pantry.
I had already stripped the wallpaper border and painted the kitchen. 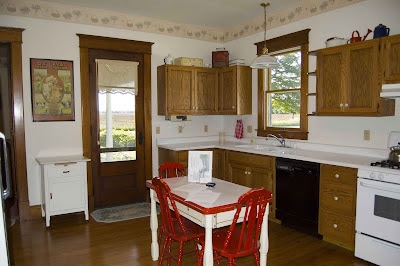 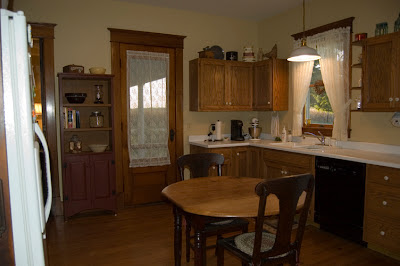 Pleased with the result, I thought it would just be lovely to have the pantry match. Seemed like such a simple thing. Figured I'd have the whole project done by the end of the day. Mwah, ha, ha, ha, ha. Yeah, that didn't happen.

See, once I got in there we realized the gap between the cabinet and the wall was so large it would be nearly impossible to paint and have it look decent. I had already removed all the contents and shelving for the closet. So we thought maybe we could just move the cabinets out temporarily as well. So we detached them from the wall and promptly got them stuck in the door. They must have been assembled in place. The only way to get 'em out was to take 'em apart. Well, we knew we didn't like the cabinets. And we never had any intention of keeping them. We also didn't like the floor. We needed to reconfigure the kitchen someday anyway...blah, blah, blah. So one thing leads to another, as it always does, and the next thing you know we had the room gutted. 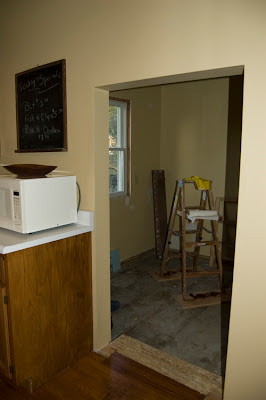 Right about that time the weather warmed up and the outdoor projects started calling our names. So we've been sitting here not only with an unpainted pantry, but a huge honkin' fridge AND a giant hole in the wall for five months now. Instead of the hole where the monster fridge would be recessed and the glorious mudroom I had envisioned on the other side, it's become my woodworking project finishing room. 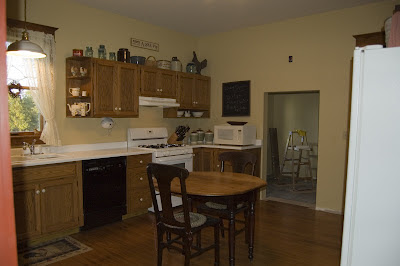 But not for long! Now that the final coats of paint have been applied to the porch, it's time to get that hole filled with a fridge. I'll lose my handy finishing room, but that's okay. I'm afraid we'll be needing the expanded coat closet space before we know it.
Posted by Christine at 6:22 PM

Your kitchen's huge! I really like the color you painted it, too. And I think I had the same flooring in my kitchen that you had in the pantry. Kindred spirits, indeed!

I love your kitchen...its huge! We have the same problem with our fridge, its just kinda there and looks out of place. And I feel your pain about the coat closet. We're also form Indiana and have no closet for coats so they are in the laundry room, front bedroom, and get thrown everywhere. We're trying to figure out a way to store them (in one place), but have no idea yet. We're thinking about building a closet in the laundry room.

There is just something fundamentally wrong with a wash bucket on top of a refrigerator with an in-door icemaker/dispenser. You want me to store that firdge for you???