I have wanted to weave a doublewide herringbone throw using my handspun yarn ever since I first bought the giant bag of raw Shetland fiber. That wasn't yesterday. In fact it wasn't last year either. I'm not even going to say how long it has been and leave it at that. At least I know it hasn't been a decade.

The spun yarn has been patiently waiting for me to do something with it. I look at it often and think, "Okay, I'm going to do it." Then I panic. I've never woven double weave before. I get the concept - weaving two layers at the same time with a join on one side resulting in fabric twice as wide as what you see.  Seems simple enough until you go to actually do it. I finally gave in and decided to join Linda at Tabby Tree Weaver for a class. I figured it was better to make all my mistakes there rather than to mess up my precious homespun yarn. And oh did I ever make mistakes.

While there I used a nice inexpensive cotton yarn she had in stock. I liked it so much I decided to try making a throw out if it before I do the wool homespun throw. I was making enough mistakes to realize there was still a learning curve to get past. Now that I have the cotton on the loom, I'm glad I made that choice. This is a SLOW process. I'll be able to tie on the wool warp and keep on trucking. 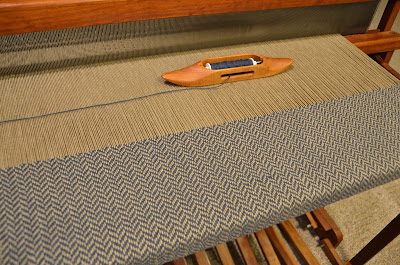 The hardest part, besides the ridiculously complicated threading, is getting the selvage edges to look good in addition to the fold. There is no mindless throwing the shuttle back and forth. You have to pay attention to every pic. And you don't dare stop in the middle of a treadle sequence. My studio assistants are not much help in that regard with their constant need for attention. At this rate it may actually be a decade before I finish it. 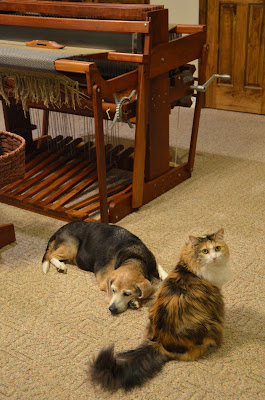 Posted by Christine at 4:38 PM

You go! I've toyed with it...but would like to do a class first!

How sweet; your assistants are color-coordinated.

What you have so far is beautiful... and like your assistants mine doesn't have opposable thumbs either... that would be helpful...LOL!

I am seriously Speechless. I cannot wrap my head around this. What you have on the loom right now is beautiful. The handspun wool will be breathtaking and I cannot wait to see it- even if I wait a decade.
Kim

I will borrow that for my house projects:

"Haven't you finished that yet? Why don't you hire someone?"