Well, happily-ever-after, it seems, is a very short amount of time. My grand plan of complete and utter chicken integration has failed miserably.

You'll recall Blackbeard had taken over command of the playground and a sense of mutual respect amongst the boys had ensued. After all, Bob was four times the size of both Blackbeard and Jack. It was all fine and dandy until Ol' Jack, out of sheer frustration, figured if he couldn't cavort with the ladies than by George he wasn't going to let Bob do it either. So it was two against one and that was more than Bob was up for. He started spending almost the entire day inside the coop. Needless to say he was getting a little frustrated and was taking his frustrations out on the ladies. The ladies were not impressed with the situation at all. 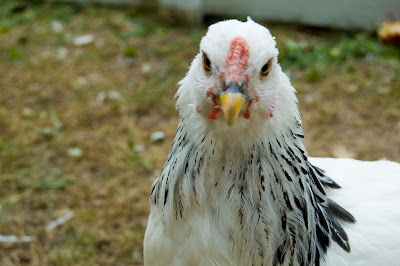 "Do something lady or else we're never laying eggs."

So I had a chat with The Pirates. They weren't happy with the new arrangement either, even though they liked the deluxe accommodations. They demanded separate but equal facilities. So we quickly converted the storage side of the hen house into the Pirates lair. 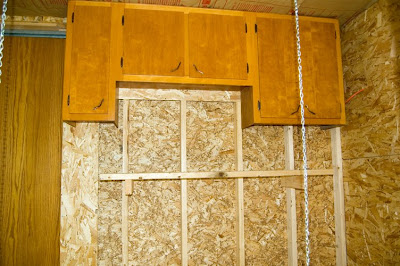 And some Wench sized nest boxes made them happy. 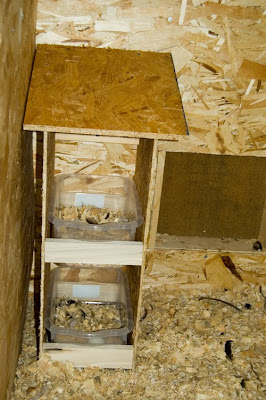 But they still didn't like looking at Bob and were about to start holding sit ins and other demonstrations when... 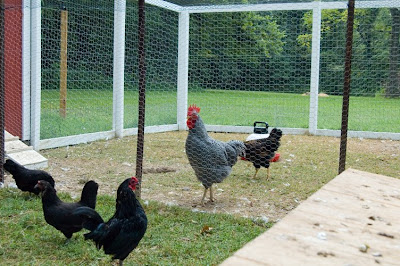 we hurried up and finished the second run. Now Bob and his Fat Bottom Girls are on one side... 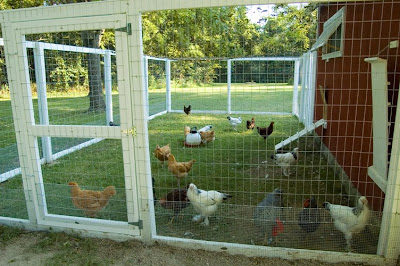 and The Pirates are on the other. 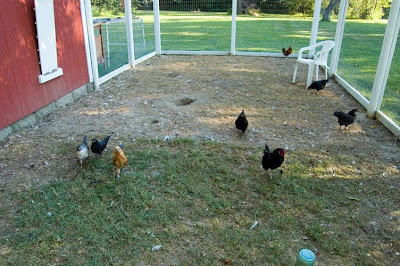 Where they will live happily ever after or else they'll go visit our 82 year old neighbor who said he'd LOVE to have them over for dinner.

So this, my friends, concludes The Year of The Chicken here on the farm. After five long months all of our chicken chores are done other than providing them with food, water and gathering eggs. Believe it or not, my next post will have absolutely nothing to do with chickens!
Posted by Christine at 11:39 AM

Who have thought raising chickens could be:

Awwhhh.....I'm gonna miss your stories. Surely there will be more to tell...the fun's just beginning!

Seriously, your project turned out realy nice. I'm jealous, I want chickens too, but not so many!

Amelia I pick (G) I sure will miss Bob and his girls. Well all of them, please let us know from time to time how they or doing.I bet we will love what ever you have next.
Patsy

Ahhhhh. I think we will all miss hearing about your wonderful chickens. Please post about them once in awhile. I am sure however, whatever you choose to write about it will be interesting. You have a gift for keeping us all interested in what you have to say.

OH i DO HOPE YOU DON'T STOP WRITING ABOUT THE CHICKENS. YOUR STORIES ALWAYS MAKE ME LAUGH OUT LOUD.

Hmmmm. No chickens in the next post? Maybe you can do it once or twice - but I don't think you will make it 4 posts before you update us on the fowl exploits at your coop. ;-D

No worries folks. Renee is right. It won't take long for the chickens to do something worthy of notice.