One-Eyed Calico Jack commandeered the main coop vessel the other night. It was a quiet mutiny. We didn't even know it had happened. But when I opened up the coops the next morning here comes Ol' Jack strolling out of the big bird's coop. Just as proud of himself as he could be. He was no doubt the king for the night, because we know Bumbling Bob's plum scared to death of him. 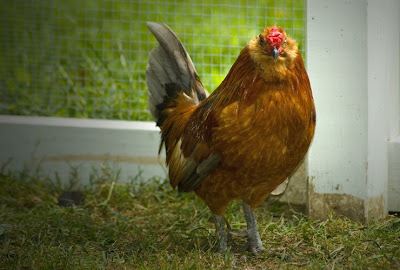 Jack must have sneaked over to their side and hid inside the coop amongst The Girls before we locked up for the night. (I have visions of the scene from the movie ET, where ET is hiding in the closet with all the stuffed animals.)

I wanted to integrate the two groups from the get go, but it seemed like The Pirates were public school street-smart hoodlums with mad ninja skills and Bob and The Girls were the over-protected homeschool kids. Didn't quite seem fair to throw them all together. So we figured we were going to have to keep them separated forever.

When all the birds piled out of the coop that morning though I thought maybe we could make it work. Jack hadn't killed Bob, which is what we were afraid of. And The Girls hadn't started dressing provocatively, smoking cigarettes and getting tattoos or anything. So I went ahead and moved Blackbeard and The Wenches in too. They quickly took over and made themselves at home. 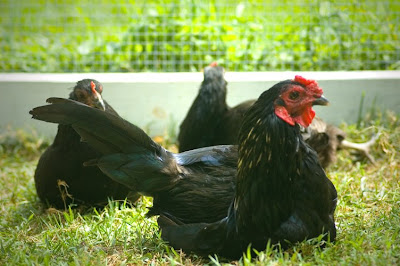 Now it's very much like high school out there. When you glance around the yard they very much have their cliques. The Wenches want nothing to do with The Girls and all the guys keep themselves busy showing off.

Bob is four times his size, but Blackbeard is most certainly in charge. I think Bob respects him a lot. In fact, I've noticed Bob's even picked up a few pointers on how to treat the ladies. He was doing the Hey-look-at-me-I-have-a-tasty-bread-crumb-for-you song and dance beautifully yesterday. I almost misted up I was so proud. Poor boy still needs some work on his approach though. 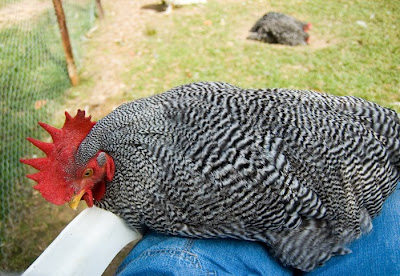 "I just don't understand why they don't like me, Mom?"

"Don't worry, you'll figure it all out eventually, son."
Posted by Christine at 1:27 PM

You are so funny. We have people that live in our village that act just like that. I look at them and see your chickens. And lol
Patsy

I want chickens....that's all there is to it! I gotta get me some chickens! Too funny!

Oh my gosh! You are hilarious! Talking about the girls getting tattoos and all--too funny!!

Ok, I will admit it. I think I am falling in love with Bob. lol

I love reading about Bob and the rest of your chooks. I laugh out loud.

Your chicken stories are the best! You make me laugh! My DD has chickens and I get to listen to her stories, but yours are much funnier! I love it!