The Curious Incident of the Dog in the Day-time

It was a day like any other day. Household chores and holiday preparations occupied my time. The normal rhythm of time on the homestead undisturbed. Until the middle of the afternoon that is.

Moments after the second feeding of the day the porch dogs headed out for their routine perimeter inspection. It's the only exercise the porch dogs get during the winter months. Three times a day morning, noon and night. If they're feeling frisky and it's above freezing and the ground isn't wet they might make an extra trip out to half-heartily chase a squirrel. But only under those conditions. Heaven forbid their precious paws touch wet or frozen ground. Today though, the UPS driver arrived just as they were on patrol circuit beta.

The alarms were sounded which includes the beagle, Lucy, barking first then the big dog, Bandit, joining in. That causes Willa to take notice and announce the arrival to the barnyard where the roosters start to crow and the hens cackle all while the sheep stand around and beg for handouts, their one track minds always on the food network channel.

The porch dogs quickly move into position for the prime tire sniffing opportunity while the driver jumps out of the truck and walks to the porch with the package. The beagle follows him, because you just never know he might have food in that box, and sits at my feet. I receive the box and return to the warm house and my gift wrapping. Two minutes later I hear the familiar scratch at the door. Perimeter patrol beta was complete and they wanted to lay their bums back down on their comfy beds next to the radiant heater. Only there was no big dog. Strange. I poked my head outside and looked around. I called for him. "Bandit, here boy." I paused and listened for the jingle of collar tags. Nothing. I called again. "Bandit, come here boy. Baaaannndit." Old One-Eyed Calico Jack, the bantam rooster, crowed in response but there was no sign of the dog.

"Well maybe he's back out on patrol" I thought to myself. So I returned to my business. After fifteen minutes or so I stopped at the back door thinking he would surely be waiting there to come in like he always does. He never scratches. He just sits patiently and waits for someone to let him in. But he wasn't there. It's really cold outside. He doesn't like the cold. He's not exactly energetic on his best days. In fact he's almost the laziest dog I've ever met. Second only to my parent's dog. And lately he had been limping a little as if he'd sprained an ankle while chasing a squirrel. He wouldn't be on the cover of any dog agility magazines by any stretch of the imagination. "So where on earth is he? He's never not come when I called him" I wondered.

Worried, I donned my coat and boots and headed outside. By this point I was thinking he had hurt himself and couldn't get up. It was the only logical explanation. The porch dogs both have Invisible Fence collars and never leave the property. They don't even get close to the property line. All the squirrels in the neighborhood know this and will sit just out of range and taunt the dogs. "Nana nana boo boo you can't get us" they say while wagging their tails in the air.

It's not a tremendous sized yard. There are only so many places a dog could hide. I checked them all yet he was not in any of them. I called and hollered and called some more. No Bandit. By this time the kid was arriving home and joined in on the search. He took to the woods behind the house even though it was outside the Invisible Fence area. No sign, no tracks, no nothing.

Obviously the UPS man took him! I mean where else could he have gone? Maybe the UPS guy ran over him, panicked and took the dog to hide the evidence? The guy makes it obvious he doesn't like dogs. I doubt many UPS guys do.

Did you know that when you call the main UPS telephone number you get someone that sounds like they are in Japan and they don't understand the urgency of your dog being dognapped? I mean it's not like they're busy this time of year or anything you'd think they'd jump all over this missing dog issue. But instead it took several hours and phone calls to finally get a denial that the driver had the dog. He insisted he never saw the dog. I asked which direction he went after leaving our place, just in case the dog followed him. He said he left our place heading North and didn't stop again for several miles.

Bandit had been missing for hours by this point. The sun had set and it was getting very cold. More search and rescue efforts were made around the property but no signs of life were found. Lucy, the beagle, searched for hours trying to find her friend. Finally after the last evening patrol she gave up. There was no point. He had disappeared without a trace. Meanwhile, inside the house every possibility was being discussed. The Invisible Fence was tested and found to be in working order. So how did he get off the property? He had to have been taken quickly inside a vehicle or else he would have screamed and hollered when he received the shock the system puts out. It was a mystery. One we would probably never solve. He was just...gone.

Late that evening, while breaking into the midnight snacks, a dog was spotted at the back door waiting patiently for someone to let him in. He was muddy and wet, well, frozen actually and limping terribly. He looked like he had a VERY long, hard day. And he was exhausted. Clearly he had crossed the creek to get back home. There were icicles dangling from his fur.

There is no question in my mind that Bandit stowed away on the UPS driver's truck and bailed out at the next stop. Why, I have no idea. A boyhood prank? Just a tawdry night on the town? Or a grand adventure to write in his memoir maybe? I suppose we'll never know as he doesn't seem to want to talk about it. 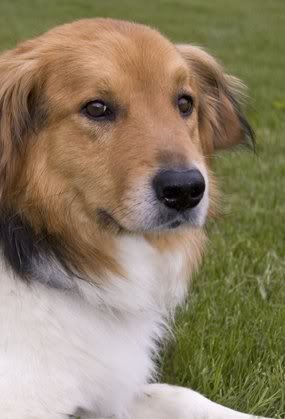 BTW, If you've never read the story The Curious Incident of the Dog in the Night-Time I would highly recommend it. It's a fabulous read.
Posted by Christine at 9:31 AM

Sooooo glad he is home.

I had a friend who lost his dog despite an invisible fence. Whether the dog saw something and ran through the fence, or whether someone dognapped him, (he was a beautiful purebred dog), he has no idea. Terribly sad.

Well that would have scared me to death! I'm thrilled Bandit made it home safe and sound. blessings, marlene

Oh poor Bandit. I hope his leg is okay. Thank goodness he made it home.

Poor doggie. I bet he never does that again! I hope he is all clean, thawed and warm!

I'm so glad this story (well-told, BTW) had a happy ending! Much too close to Christmas for heartbreak....

Holy moly. Glad it had a happy ending. Yeesh Bandit!

It would not surprise me if he took a ride in the UPS truck. Our dogs have jumped on a school bus!
Glad he made it back home.

I'm so glad it turned out okay. He'll probably stick pretty close to the house for a while at least!

Oh my gosh, I would've been scared to death! I'm glad he got back home safe & sound.

OMG, you must have been fretful! I'm so glad he made it home. I also hope he learned his lesson!

so happy Bandit is home safe (maybe not sound!) what a sweetie. If you loved "the curious incident..." be sure to read Edgar Sawtelle - even better!
My husband and I are getting ready to return to our country roots and buy a farm house and homestead in either Idaho or Montana (we're researching.) Currently we live in NC on 4 acres with two corgis (protected? by an electronic fence) which is great but doesn't offer any peace of mind when the deer stroll by!