I've always wanted to make a batch of old-fashioned soap, just like Grandma would have made. Nothing fancy, just plain and simple soap. But then I read all about it and decided I didn't really need to make my own lye from wood ashes. Nor did I feel a burning desire to render my own fat. But I still wanted to learn the method for making soap. It's easier than you might think.

First you need to gather up all your supplies. You'll need a large pot either enamel or stainless steel. I happened to have an old water bath canner lying around. You'll also need a glass or other heat resistant container for making your lye solution. I used a giant Pyrex measuring cup. You'll also need a wooden spoon and an instant read thermometer. However, the most important supplies are safety goggles and chemical gloves. Lye is nasty stuff and you need to treat it with respect. I purchased the lye at a farm supply store, you might find it at a hardware store as well but they'll probably charge you an arm and a leg for it. 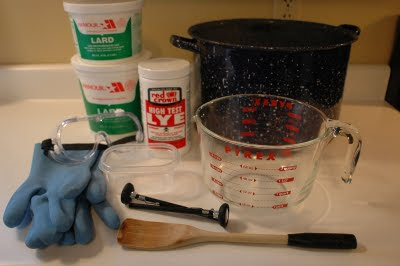 You will also need a mold of some sort. I used a wooden box and lined it with aluminum foil and waxed paper. You could also simply line it with a damp cloth. Once the quality control manager inspected and approved the box I kicked her out of the kitchen. It's not safe for pets or kids to be around when you're making soap. Make sure you set aside enough time to not be interrupted. 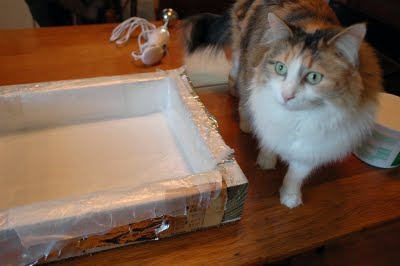 Accurate measurements will ensure your soap turns out the way it should. Weighing the lye is the best method. Make sure you are wearing your goggles and gloves! 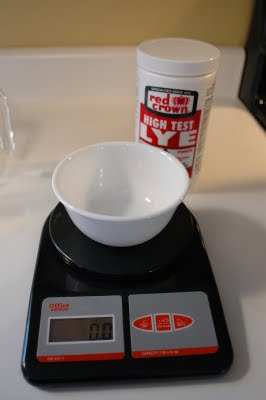 Using a lye calculator that I found online I determined that I would need to add 13.7 ounces of lye to 26 ounces of water for the amount of lard I was using. Always add the lye to the water in small amounts. If you did the opposite, adding water to lye, you could end up with a volcano effect. (That would be bad, don't do that no matter how cool it sounds or you'll need new countertops.) Stir with a wooden spoon, this will turn the spoon dark brown so don't use your best one. This solution will heat up considerably and you will need to let it cool to about 110-125 degrees. That takes awhile. 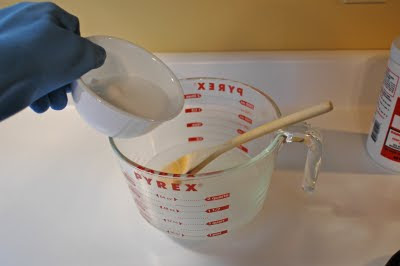 In the mean time you should melt your lard. I used 104 ounces of lard. Allow the lard to cool to the same temperature as the lye solution. Again, it takes awhile. Play a hand of solitaire or pick your toes or something to keep yourself entertained. 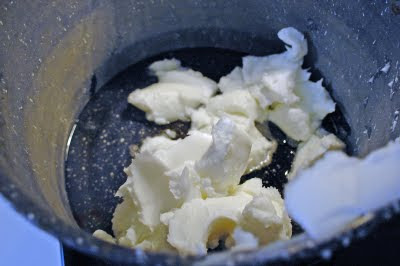 Slowly and carefully pour the lye solution into the melted lard. When you do, it will change colors like the photo below. Now, you can spend the next hour stirring this with a wooden spoon by hand or break out that hand blender you never remember to use for anything else. The blender will speed the process right up. Keep in mind the hand blender can't run constantly though or you'll burn up the motor, but you can run it off and on for about 15 minutes and achieve the desired result. Be carefull not to splash, this is why I'm using a large canner instead of a small pot! 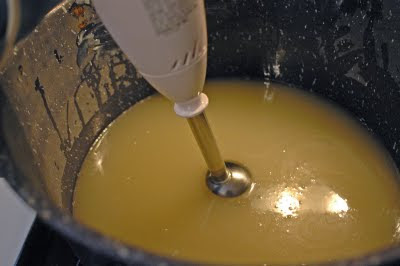 You're going for a thick custard like consistency and a white color. 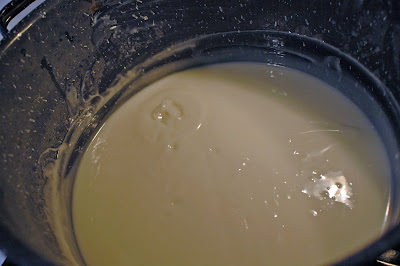 Pour the soap into your mold, cover with a towel or blanket to keep the heat in and set it aside. If you want to have a little fun, put a sign on it that says "Do Not Disturb" and then leave for the evening. Your family members will drive themselves crazy trying to figure out what's under the blanket. 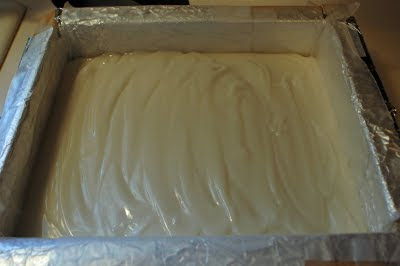 The next day pull the soap out of the mold and cut into bars. Then place them somewhere where they can breathe and cure for 2 to 4 weeks allowing them to get nice and hard. 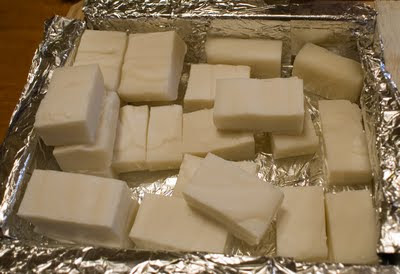 That's it. That's all there is to it. Just a little lye, lard and water and you can be squeaky clean for months!
Posted by Christine at 4:47 PM

Email ThisBlogThis!Share to TwitterShare to FacebookShare to Pinterest
Labels: Making Do

I'm impressed! Not enough to try it myself, though; I'll just keeping buying my goats' milk soap from blogpals. :-)

You would think the lye in the soap would really be hard on your skin...but guess the lard neutralizes it. Interesting post!

So that giant measuring cup was a wise purchase!!

ANOTHER thing on the list of things that I want to do "some day"...

Kelly, you have no idea how often I use that giant cup. I don't know how I ever lived without it! ;-)

De-lurking here to say that my Grandma always made lye soap in the winter and stored it for our poison ivy outbreaks in the summer. I swear it works better than anything over-the-counter. :)

Christine,
I too have been wanting to make the old fashioned lye soap (that 'back to the basics book i have stirs up a lot of old fashioned projects I'd like to do someday.. still have a deer hide in the freezer that needs to be 'smoked' lol) anyways, I was waiting for someone to butcher a hog! It never crossed my mind to just use lard! What a great idea. I think I'd still like to try the wood ashes to make the lye, (only because we have so many ashes around here this time of year) but what a great idea to just use lard. The lye does work wonderfully for poison oak/ivy and every spring i wish i had made some lye soap that previous winter :)

Thanks for sharing your project!

I would like very much to make soap, but I have Fear of Lye.

There doesn't seem to be a way to make soap without it, at least as far as I have found.

Karen Anne: there is NO reason to fear lye, respect it, yes, but fear it no! I wear gloves and glasses, an apron and face mask or simply keep my head back so I don't smell the fumes. Using MP (melt and pour) isn't really soaping. That is taking somebody else made soap. Take that step and try it out. It really is fun and I'm hooked!!