I love volunteering at Billie Creek Village. I only wish I could do it full-time, year-round. The village is currently for sale though and it is anyone’s guess if it will even re-open next year so I’m trying to make the most of the last hurrah the Covered Bridge Festival brings.

I learned quickly last year to sit down as much as possible. There is such a flurry of activity that you don’t realize how exhausted you really are until you drive home. Since Friday I’ve spun six skeins of yarn and have two more bobbins full of singles. I don’t think that’s too bad given all the interruptions.

I love how the spinning wheel has the power to mesmerize people. Most people really are drawn to it like bugs to a zapper. The men tend to look at the wheel and the mechanics of it, the women look at the yarn. Not that I’m being all stereotypical or anything, it just seems that’s how the different brains work. Interesting.

Even the bus loads of school children this year have been engaged. I’ve not wanted to shoot a single child so far.  (Hey, no judging, you have NO idea.)  There are, however, children all across Central Indiana right now with wads of raw wool in their pockets. Their mother’s will be thrilled when they find that in the wash, tee hee!  Some of them have actually shown some serious interest in learning the craft. I feel like a spider spinning a web to catch unsuspecting victims. Mwah, ha, ha… 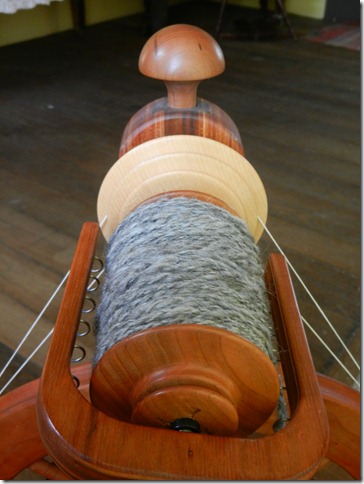 I also managed to fix up the old Kromski Symphony wheel that belongs to the village and start using it. It had seen better days, as in it was rusted so much it wouldn’t spin. (Now I can bring my cherry Matchless home and e-mail Schacht and prove to them the whirl they sent me is absolutely NOT cherry.)

It has been a great, productive festival so far. Today it is freezing cold and poring down rain though. I’ll be staying home since the wagon rides that bring the visitors to me at the farmhouse won’t be running. As much as I’d like the day off to rest, believe it or not I’d rather be there in front of the fire in my costume spinning yarn and sipping cider. Even if nobody else ever showed up.

Posted by Christine at 7:12 AM

Email ThisBlogThis!Share to TwitterShare to FacebookShare to Pinterest
Labels: Living History, Making Do

They're going to sell it? I had assumed it was run by a non-profit. Is there any protection for the buildings, etc.?

It has been a dream of mine to buy an open-air museum/village and to turn it into a true and total living history "locale" - a place where visitors, and even the presenters, would feel like they literally time-traveled.
If I only had money...
I hope that the future of Billie Creek Village is bright.

I went looking for more information and found this site with an amazing quilt:

It's been for sale for some time. The couple who own it are a lovely couple but not exactly in the prime of their lives. If it doesn't sell, I don't look for it to be open after this festival. I'm glad I've gotten to spend as much time as I have lately as it's probably my last time.

Ken, I would like to have a billion dollars :-) I would fund Operation Migration, the project to reintroduce endangered whooping cranes; save old houses; give a giant bundle of money to environmental and animal organizations; and, oh yes, spend some on myself and the people in my environs :-)

Imagine how much good any of those billionaires could do, and instead they mostly spend money on ghastly ginormous houses, private jumbo airliners, and the like.

Karen, Is it the upkeep that is the problem? Maybe if it doesn't sell. a group of volunteers could form to do that.

Karen Anne,
I agree with you about folks with money wasting it the way they do. Thank God we had couple of rich people with a vision nearly a century ago such as Henry Ford (Greenfield Village in Michigan and the Wayside Inn in Massachusetts) and John D. Rockefeller (Colonial Williamsburg in Virginia).

Your idea of a group of volunteers pooling their money could work. Who knows, if word gets around you might even garner a few sponsors.
I just hate seeing history being lost...
Good luck to you all down there!

It is a non-profit. The ownership is complicated. What this place needs is someone like Ken with an overflowing bank account.

If I could just win the lottery...

There is a complete lack of volunteers. It is the downfall of the place. As far as I can tell Karen and I are the only ones who still go out there without expecting something in return. We had a hard enough time pooling our money together to buy some cobbler this week. Buying the place is probably out of the question. LOL

i bet most moms are used to kids having crazy stuff in their pockets at wash time. like a treasure hunt. i'm like you in that i'm giggling like a little girl. to cute. enjoy your rainy day. (:

Keep on keeping on Spider Woman! You are doing some amazing rug weaving.

Hi Christine, Thanks for visiting an blog. I love to meet new people. I love your spinning. I have just (this summer) bought a wheel on Ebay. I'm so excited. I tried spinning for the fist time and love it. Boy do I need practice.- You asked about separating our geriatric hens from the new girls. We separated the coop with chicken wire so they could see each other. After they were out of the brooder of course. This way there were read no "new" hens. Everyone got along really well. I hope this helps. Kelly

I've done a number of spinning demos in this area, and have found that kids ARE NOT SHY!! They will immediately say, "can I try it?" Sometimes it's OK, and I'll let them sit down at the wheel, and sometimes it's not. How do you handle that without hurting the kid's feelings, and possibly offend the parent?

I do have that same issue, Deb. I've decided I'm going to start bringing along a drop spindle. If they want to try it they can try it on a $10 spindle versus my slightly more than $10 wheel. *cough*

Gee, everywhere I've been there are old house nuts and historical building nuts. With all the visitors, I wonder if some group couldn't be gotten together - maybe cast a wider net geographically? Have flyers handed out at the village? Too late for that I guess. Letters to the nearby newspapers? Is there some semi-nearby historical society?

Sorry to hear it's going to be sold. The yarn looks fantastic! Being a K-8 teacher I can sympathize with you!

I agree Karen Anne. I think part of the problem is that it is located in such a rural part of the state. Those who might support it locally have been milked dry so to speak and those not local don't feel it is their issue to support. I'm not sure what the answer is to be honest. Sometimes I think maybe is should shut down for a season so people will understand what they will be missing. I think some think it will always be there as if it some public funded state park or something.

So, your post and a few comments got me to thinking...so I wrote about it on my blog:
http://passionforthepast.blogspot.com/
I hope you don't mind me basing it (kinda) off of your post. But I think you might enjoy it, and Karen Anne might also.

I have thoroughly enjoyed your posts on the village. I hope you can keep it up.

Wow! All that fun and being productive, too! I may have to look up when the Covered Bridge Festival is. I've never been and it sounds like fun.

I would love to volunteer at a place like that! Sadly, I live the whole way across the country! I hope everything turns out alright with it.

That would be my dream job,sitting by the fire and spinning! I just started spinning this year and I am so in love with it!

I know I am a little late on this, but I just drove by Billie Creek today and noticed the 'For Sale' sign. Do you know how much they are asking for it?