playing Peek-A-Boo with a terrorist. Wacky Wilma Wench has hatched two babies this week. However she really doesn't want anyone to see them. 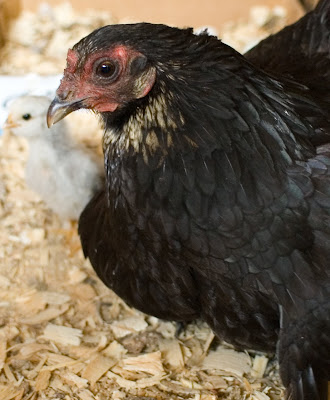 "Back away from the cage lady or I'll rip that camera outta your hands." 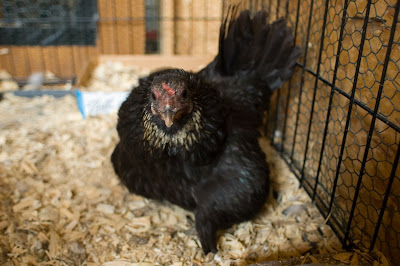 "Nobody messes with my babies." 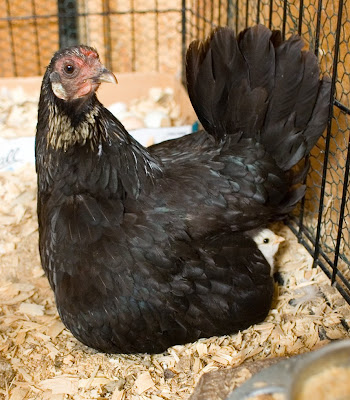 Luckily for me one of her babies is a curious little thing. Bad for him though. If he gets caught peeking at me she pecks him on the head. Poor little bugger. I'm not even sure what the other one looks like.

On the other side of the coop Minnie and her three little ones are ready to come out of the cage later today. Hopefully Pearl won't abscond with them. 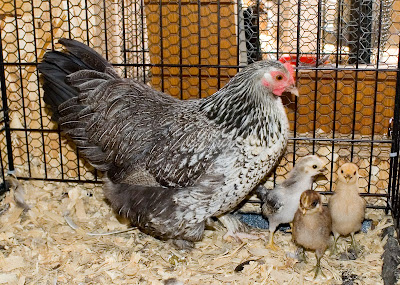 I have a security team standing by to sound the alarm just in case. 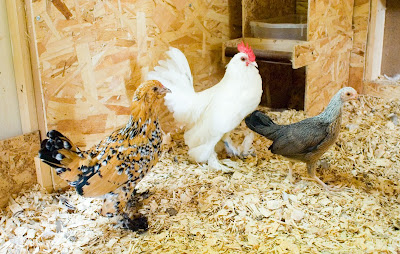 Posted by Christine at 7:20 AM

Good morning Christine!
Thank you for the chicken advice, hobby farming is such a learning experience! Please do tell what the beautiful yellow/blk speckled bird is!?

Awww. I see a white d'Uccle! Beautiful birds :) Kristi, if you're talking about the last picutre, that's a mille fleur d'Uccle. d'Uccles are one of my favorite chickens, super cute, talk ALL the time. Not the greatest setters, but I've had a few good ones. They come in LOTS of beautiful colors now.

Yes Kristi, Rayna is right she's a mille fleur d'Uccle, appropriately named Lady Mille d'Uccle. Isn't she just gorgeous? The white one is her husband Sir Sparky d'Uccle. They are a very docile breed and can be confined easily. In fact mine hardly ever go outside. They would rather stay inside the coop. The other bird is Twiggy, Millie's maid servant who never leaves her side. ;-)

OH cute little banty babies! I want bantams but my chickens are mean and would beat them all up!

Oh Christine, what lovely pictures. I really love the last one. This is my first year with banties and I am loving it, even though most of mine ended up being roosters. I sure do enjoy the chorus of crowing every day. LOL Winona

Oh my! I think I've found another blog that I MUST add to my blog roll so that I can read it daily!

What beautiful chickens and wonderful photos!