The kid said he wanted to learn fencing. So last summer while we were building the chicken garden we had him out there stretching the wire and you know what? He said that wasn't exactly what he had in mind. You would think on a farm if a kid wants to learn fencing that kind of fencing would be a safe assumption. But no.

No, he wanted the poke-someone-with-a-sharp-stick kind of fencing lessons. I told him we could use an old antennae off of a car and he could poke a target on a tree or something. But again he rolled his eyes (he's a teenager and they're good at that) and declared that I was missing the point entirely.

So yesterday we drove a gazillion million miles to the city for proper beginner fencing lessons. We lucked out and one of the other families in our homeschool group has a recent graduate that just happens to be an expert fencer. And he's willing to teach the younger kids (one of the awesome things about homeschooling).

He showed them all the different weapons and equipment that is generously being loaned to the group by The Indianapolis Fencing Club. 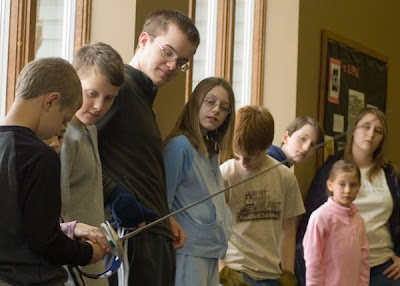 He then proceeded to put them through the wringer. 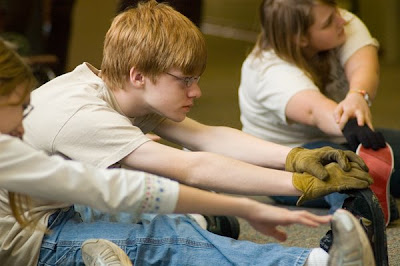 I don't think they were expecting that. 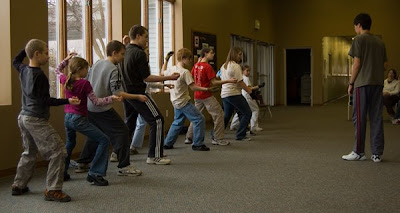 I'm told standing En Garde for an hour while practicing lunges and other fancy footwork is WAY harder than it looks. 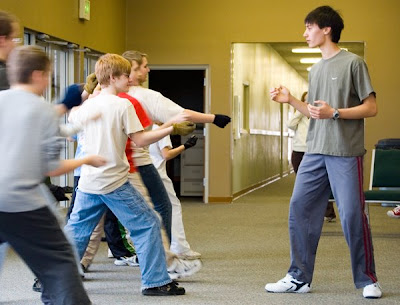 Which I thought was interesting because from my point of view it sure seemed like they were having fun. More fun I suppose than poking a tree with an antennae.
Posted by Christine at 9:09 AM

I had a nephew who took fencing lessons. My husband said the same thing to him that you said to your son about fixing fences. Our nephew didn't think it was funny either.
I watched a little of the Olympic fencing competition on TV last year. Those athletes are quick!

You are right...that is a tattered pioneer quilt over the back of my rocking chair. I can't believe you have one too! Man...we are alike!

My daughter took fencing in junior high for a while. I thought it made her look very elegant. But, I suspect that's not why your son is into it. :)

Some pretty fancy hobbies that boy of yours has decided to take up. Must get it from others in the family (the chicken lady?). Very cool stuff. He's definitely not going to be a boring adult.

My oh my do I remember the eye rolling phase. Show me a teenager that doesn't go through that one.
I remember taking the fencing class in Jr. high, many moons ago. It was not an elective, we had to do it in PE class. I didn't care for it and was glad when it was over and the really hard stuff like dancing began.

Whenever I think of fencing I always think of those old Errol Flynn movies.

SOOOOO jealous. I miss homeschooling. This is a perfect example of why. I hope he has fun - I would have been happy with the TV antenna and the tree, but I don't like my targets to move.