There was a day, not long ago, that the Pirates would have nothing to do with me. They shot out of their cage that first day and made it explicitly clear they were not interested in human contact. Since then I've done my best to establish a relationship. Tried to teach them some manners and civilized behavior. Tried to promote social skills and acceptance of others. Yet they stayed at a distance and continued their fightin' ways.

So it was Old One-Eyed Jack, the most hen pecked and skittish of all that I deemed my target of interest. I gave him his own place. Provided him with some lady friends. And soon he decided maybe I wasn't so bad after all. He started liking the deluxe accommodations surrounding him. Every day he waits at the screen door for me to bring him some treats and he and his ladies take them from my hand. Never dreamed he would do that.

Then came the day that things went awry. Somehow Old Jack ended up on the wrong side of the screen door. Bob's side of the screen door. Where Bob, having been tired of being tormented by Blackbeard saw another little rooster in his coop as a dire situation. So much so Bob proceeded to chase him around the coop and try to kill him. It's hard to find a good hiding spot when you only have one eye so when I saved Old Jack and returned him to the safety of his own coop a connection was made. I think Old One-Eyed Jack actually started to like me. 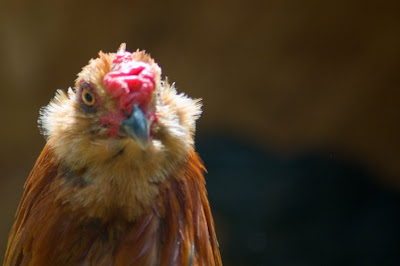 I thought he would appreciate it if I allowed him to take his ladies for a private romantic stroll. Not realizing how difficult it is to be the flock leader. Blackbeard makes it look so easy. But it's really hard to keep one eye on predators and one eye on everyone else if you only have one eye to begin with. I think it just stressed him out. Had I not witnessed him consummating their relationship myself I would have worried I did the wrong thing by giving him some ladies. His solution was to round up the girls after a short walk and head back inside the coop. Where it seems he wants to stay. 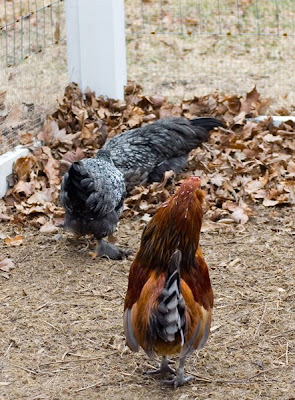 I go in and visit every day. And every day he's waiting at the door to greet me. It's a screen door so he and his girls can see all the other chickens and watch the goings on. But that means all the other chickens get to watch me feeding Jack. Of course now they're all wanting to be fed treats by hand. Which is okay. It gives me the chance to inspect them up close. And I enjoy it.

Today though marked a new passage in the chicken/keeper relationship. After lunch I provided them a buffet of cantaloupe rinds. In my coat pocket I had a bag with three slices of bread, well one slice and two heals nobody ever wants. They LOVE bread. They always get excited when the bread crumbs come out but today it looked like the mob on a Black Friday at Walmart. I had pirates flying up, landing on my arm and wrestling the bread right out of my hand. And Jack, Old Jack actually SAT IN MY LAP to eat his bread! I'm not sure I want to establish much more of a relationship than that.
Posted by Christine at 6:05 PM

Jack sounds like he is becoming a little sweetie. And I think it would be fun to feed them the bread. I love to go to the park with a bag of bread and feed the ducks. But sometimes it seems that the slower/weaker ones don't get any and a few others get lots.

If I were in your place with all those chickens I am afraid I would never be able to eat any of them, they would just become my pets.

It sounds to me like Jack just played his, "Get out of freezer camp Free card."

You ladies don't have to worry about the chickens!! They are already "pets", the only way they will see the dinner table is if they are pulling up a seat to eat with us. :-)

You mean I can bring them in the house? Woo hooo!!

Milah, you're killing me as always...

christine...my baby goats would be a perfect addition to your farm!

Oh yes, check out those goats, they are adorable! You really need them too! Imagine the twists and turns your stories will take with a couple of kids in the mix!
Go for it Christine!!

I'm with Carol. I would have a whole henhouse full of fat, spoiled birds....